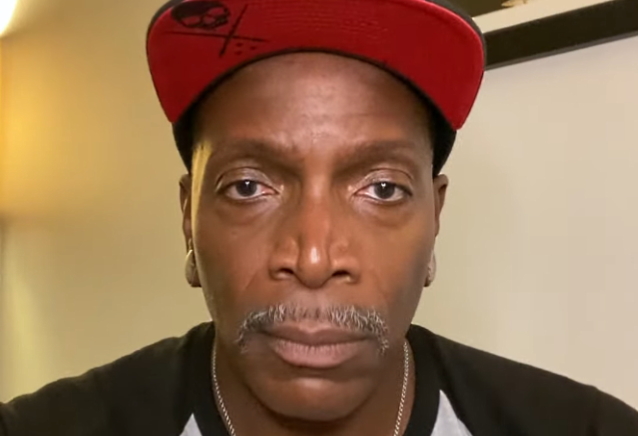 During an appearance on a recent episode of "Stoke The Fire", the alternative lifestyle and culture podcast hosted by musician Jesse Leach (KILLSWITCH ENGAGE) and DJ/presenter Matt Stocks ("Life In The Stocks"),SEPULTURA frontman Derrick Green spoke about the departure of original drummer Igor Cavalera more than a decade and a half ago. Igor left SEPULTURA in June 2006 due to "artistic differences." His exit from the band came five months after he announced that he was taking a break from SEPULTURA's touring activities to spend time with his second wife and their son (who was born in January 2006).

Green said (as transcribed by BLABBERMOUTH.NET): "When I joined [SEPULTURA as the replacement for original frontman Max Cavalera in 1997], I was already just so chaotic because Max was the front person. A lot of people had it in their minds that he created everything, SEPULTURA was his creation as a whole and the band had gotten there solely because of that. I think a lot of press and people [created that perception] because he was doing a lot of press; he's a very charismatic person, so he took on that role. And a lot of times, people were seeing him as the face, which happens with a lot of bands, especially with the singer. I think it was a little bit easier with Igor, but also difficult — extremely difficult. Because I was friends with Igor. He's one of the people that really got me charged when I was in the band and [he was partly responsible for] getting me into the band, I believe. And [his departure came] at a time where we were [on an upswing], like, 'Yes!' We'd been battling and working on a lot of stuff for album after album. We were at an album [at that point] — 'Dante XXI' — and we got great artwork, we've got a great team behind it, great songs, and then [Igor told us], like, 'I'm not gonna go on tour.' And I was just, like, 'Oh, man. This is really rough.' And then it just ended up where we went on tour with IN FLAMES, and we had Roy Mayorga come and fill in, which was fantastic.

"Igor was just going through a lot of different changes with his relationship and not wanting to be in the band anymore — not really wanting to do that style of music, I believe," Derrick continued. "It was very difficult just because it was just kind of over with that, and then people were, like, 'Oh, now it's definitely over. Throw in the towel, boys.' Certain people were just, like, 'Yeah, game definitely over.' And we didn't feel that way. I mean, as difficult as it was, we were just on this momentum. We just created something so incredible, it's hard to throw it away when you feel that you're evolving. Like, 'I'm doing stuff better than we've ever done. Let's keep this going.' So we continued onward.

"I remember it being difficult, but not as difficult [as it was], I think, for those guys when Max left, because they got a lot of the questions from the media, like, 'How does it feel since Max wrote this album…?' And then they'd be, like, ''Yo, I play drums.' 'Yo, I play lead guitar. What are you talking about?' It was never like that. Those guys wrote together as a whole. I could feel that, kind of, like, 'You guys don't know what you're talking about,' being in certain situations with the press with them. But seeing that transition, as far as with Igor leaving, it was, like, 'Oh, man. Let's continue onward. It's hard, but let's continue onward.' And again, we had a lot of support, still, [and] people believing in us. And we moved on to [Igor's replacement in SEPULTURA] Jean Dolabella. And it was again a growing process, getting used to him, going through an album cycle where people were, like, 'Hmm. It's okay. It's all right.' And then, with the sophomore album with Jean Dolabella, and joining Nuclear Blast, having a solid label, then we started to notice a change again, like a rebirth… Going out and playing new songs, people were, like, 'Yeah. I know this song.' This is really getting back up there. And then I was, like, 'Okay, here we go.' And then Jean was, like, 'I'm out,' after that whole tour. I was, like, 'No! No! We're just getting back again.' And then starting that whole process again with [current SEPULTURA drummer] Eloy [Casagrande]. But, again, having such a great label, Nuclear Blast, that helped, because they were always supportive."

Max Cavalera exited SEPULTURA in 1996 after the rest of the band split with Max's wife Gloria as their manager.

For a decade and a half, Igor has been part of the MIXHELL DJ/hip-hop/electro project with his wife Laima Leyton.

Two years ago, Igor teamed up with Wayne Adams (BIG LAD, DEATH PEDALS, JOHNNY BROKE) to form the PETBRICK project. The band's debut album, "I", was released in October 2019 via Closed Casket Activities in the U.S.

Igor's other current musical projects include CAVALERA CONSPIRACY (alongside Max) and SOULWAX.