DESTRUCTION singer and bassist Schmier comments: "Yeah, the 'Thrash Alliance' is back with a BANG! We are delighted to headline this strong billing of blistering steel! All the bands have put out really forceful records lately and are right down our alley, when it comes to uniqueness, live power and cool lads! DESTRUCTION will present a remarkable new setlist with classics and, of course, some of the brand-new slashers from 'Born To Perish'! Come out and THRASH with us, maniacs!"

Maurice of LEGION OF THE DAMNED adds: "We are absolutely thrilled to hit the clubs again and we are also talking about a special setlist, playing songs we have not played before or haven't been played in a long time, so be prepared — LEGION OF THE DAMNED is ready to rumble."

SUICIDAL ANGELS singer Nick comments: "With the release of our new album, 'Years Of Aggression', and as we promised, we return with more news, exciting news. Thrashing to the bone news! We are really pleased to join forces with German titans DESTRUCTION, Holland's finest LEGION OF THE DAMNED, and the killer FINAL BREATH for a seriously in-your-face package that will kick ass! Just check out the poster with all the dates and cities, find the one closest to you and join us for a thrash metal inferno! Do not miss this by any fuckin' chance!"

Heiko from FINAL BREATH says: "Last year, after a long 14-year period of silence, we finally came back with 'Of Death And Sin'. We had no idea what would happen, but we were overwhelmed by the reactions of fans and press. And now we're just proud to continue with our story and hit the road with such a great thrash metal command: DESTRUCTION, LEGION OF THE DAMNED, SUICIDAL ANGELS... How cool is that? It's like a dream come true for us!"

DESTRUCTION's 17th studio album, "Born To Perish", was released on August 9 via Nuclear Blast. The disc was recorded in January and February 2019 with V.O. Pulver (PRO-PAIN, BURNING WITCHES, NERVOSA) at Little Creek Studios in Switzerland and is the first DESTRUCTION album to feature Randy Black on drums and second guitarist Damir Eskic.

Damir is a Swiss guitar player of Bosnian decent who works as a guitar teacher, himself being a former pupil of Tommy Vetterli (CORONER). He also plays in a heavy metal band called GOMORRA and contributed three solos to DESTRUCTION's 2016 album "Under Attack". 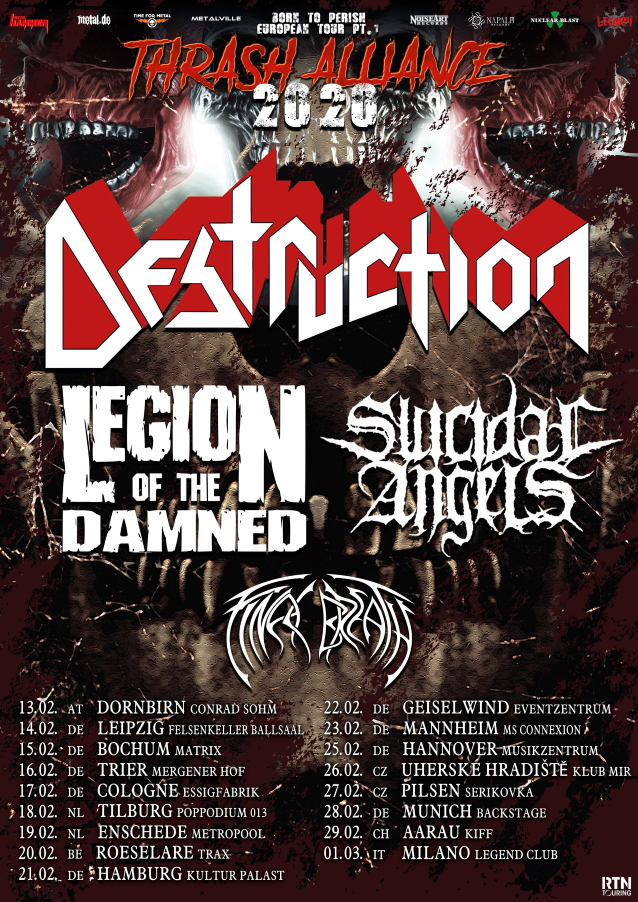