German thrash metal veteras DESTRUCTION have announced the "North America Under Attack" tour. The trek will begin in Oakland, California on May 22 and hit nineteen cities, including Chicago, New York, and Atlanta, before concluding in Los Angeles at the Regent Theater on June 11. Direct support will come from Los Angeles thrash metallers WARBRINGER and Wisconsin death metallers JUNGLE ROT.

Commented DESTRUCTION mainman Schmier: "The 'Under Attack' tour will finally come to North America. Sorry for the little delay, but it has been a busy and successful run so far in other countries and we are looking forward to bringing it to North America. With WARBRINGER and JUNGLE ROT, we are bringing two crushing bands that are friends and fit very well on this old-school billing.

"America was never easy to tour for foreign thrash bands, and that’s why it's always special for us. You just never know when it's going to be the last time, as it is not going to get easier in the future. So come out to thrash and party with us and, of course, the setlist will feature a lot of '80s classics as we as we are working on 'Thrash Anthems II' at the moment. See you in the pit!"

Joining DESTRUCTION, WARBRINGER and JUNGLE ROT as openers are HELLBENDER and DEMONS WITHIN, who will split the tour.

Confirmed dates for the "North America Under Attack 2017" tour:

A leader in direct-to-fan platforms, PledgeMusic allows artists to get more personal with their fans, offering pledgers updates straight from the band and items not available anywhere else.

The follow-up to 2007's "Thrash Anthems", the new album will re-animate another batch of classics, including "United By Hatred", "Confused Mind" and "The Ritual".

For "Thrash Anthems II", DESTRUCTION is calling on their loyal fans through PledgeMusic to help them create the record and contribute to the band's epic history.

Pledgers who pre-order the album will receive an AccessPass which will give them early access to a digital download of the full album before anyone else; plus exclusive updates, behind-the-scenes content, and sneak peeks into the recording process available only through PledgeMusic. Fans will also be able to pledge on special merchandise and one-of-a-kind experiences. These include: a signed set list; handwritten lyric sheet; a signed pressing of the original vinyl; dinner with the band; the opportunity to attend a live rehearsal or stop by the studio for a day; an original stage backdrop; a signed Ibanez Destroyer Bass from 1985; and many more.

Fans can pre-order the effort in digital and CD form now on DESTRUCTION's campaign page. 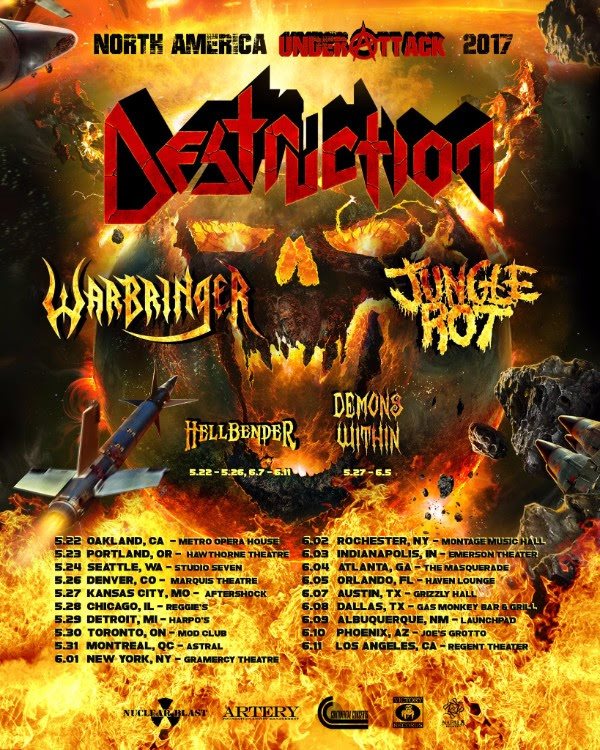