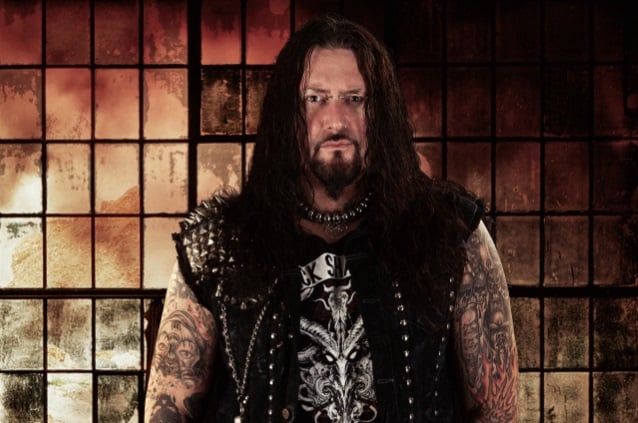 Diamond Oz of Metal Underground conducted an interview with frontman Schmier of German thrashers DESTRUCTION aboard this year's installment of the 70000 Tons Of Metal cruise, which was held February 1-5. You can watch the entire interview below. A few excerpts follow (transcribed by BLABBERMOUTH.NET).

On what "Under Attack", the title of their 2016 studio album, means:

Schmier: "We're influenced by what's going on in the world nowadays. We're under the attack of everything. There are no more quiet moments because we're having all these cellphones, we have to check our e-mails all day, the news is all over the place and yeah, we're under the influence of so many things nowadays. That was the idea behind 'Under Attack'. And, of course, the global situation. There's more wars everywhere. It's a sad tendency. 'Under Attack', for me, was the right title. Of course, it's a little controversial at the same time because nobody likes to see dark issues in their mirror. We're writing lyrics like this because, otherwise I'd turn insane. For me, it's a good psychological thing to write my ideas down. As we travel a lot around the world, I see a lot of things behind the curtain, not just in the news. I go into countries like India, Russia, America, or Columbia or whatever, everywhere, it's good to have a look inside and build your own opinion. That's what I'm writing about."

On whether traveling is the best education a person could get:

On whether he's experienced any hostility of late given the fact DESTRUCTION is from Germany:

Schmier: "Of course. We always have those stories. The Greek, for many years, they didn't care about their economy and at the end, of course, it always comes the same. There's no money. All the politicians are fucking rich — they've made a lot of money. Poor people are fucked, then somebody has to start saving money and of course, the poor people is who is going to pay for this. Germany is one of the richest countries in Europe, who stepped in and tried to help and as it always is, banks have the interest to make money, too. It's a different situation. I think I understand the Greek people. I'm not a big fan of our government, actually. There are some of those people in charge that are total idiots. At the end, it's all about making money. It's not about saving other people or saving countries. It's about making more money. That's sad to see. I have to say, when I'm touring the world, being German is still a big privilege. Germany has a lot of fans when it comes to football or German heavy metal and stuff, so I also got a lot of positive vibes. I also grew up in the last generation after the war, it wasn't so easy. Other countries like Israel where I expected people to be very skeptical about Germany, but that stuff has changed. Luckily, people forgive and move on. That's also my theory about life. I never look back. I always look forward into the future, what can you change today for better things that will happen tomorrow. That's my philosophy."

On the "horror stories" regarding Noise Records, who passed on DESTRUCTION in the mid-'80s only to sign one of their contemporaries, KREATOR, shortly thereafter:

Schmier: "Those labels back in the day, they made bad contracts. We had signed some bad contracts, too. We finally got out now, 30-something years later, we finally got out of those contracts with a lawyer and a lot of patience and investigations and everything. Yeah, we all signed bad contracts at the time because we had no experience and it was new. As an example, nowadays, you sign a deal maybe for three albums and maybe ten years of rights for the label. For us, contracts, the label had the rights for all the albums forever, which is actually illegal. You basically become a slave to the label. That's actually not allowed. Yeah, back in the day, also the payment was bad. Per record, we earned, like…how much was it? 30 pennies or 30 cents per album. It was bad. At that time, we didn't know better. We were lucky to find a label [SPV Records]. The contracts are long and difficult. At that time, there was no real lawyers doing music industry law. It's a complicated thing. I remember we had a lawyer who looked at the contracts, but he didn't understand what was in there. That's how it is. That's the price you have to pay. That's how it was in the beginning."

Longtime DESTRUCTION drummer Wawrzyniec "Vaaver" Dramowic recently announced his decision to leave the band at the end of March due to family reasons. Vaaver, who joined DESTRUCTION in 2010, took some time off from the road in 2015 to be with his family following the birth of his second child. He was temporarily replaced by former PRIMAL FEAR and ANNIHILATOR drummer Randy Black.