Reunited Texas thrashers DEVASTATION have cancelled their previously announced two-date tour of Holland (see poster below) in late October due to scheduling conflicts related to the band's forthcoming U.S. tour with SOULFLY. The group commented, "We feel like crap, but we have already talked to a friend of ours from Europe and he is going to bring us back for a full European tour."

DEVASTATION's U.S. tour with SOULFLY starts November 1 and ends on November 26. Also scheduled to appear are BLEED THE SKY and INCITE. According to DEVASTATION, "We will be opening the show so all you DEVA fans need to get there early to support. Looking forward to meeting everyone on the road. Old friends and making new ones."

DEVASTATION recently finished recording three new songs for the reissue of its 1991 "Idolatry" album. A brand new track, "Blood for Blood", was recorded along with newly reworked versions of "Desolation" and "Tomorrow We Die", both off 1989's "Signs of Life" LP.

The new songs are now available for streaming on the band's MySpace page.

The "Idolatry" reissue will be made available on September 30 on both CD and vinyl via Rockadrome Records' metal division Forged in Fire.

DEVASTATION's 2008 lineup consists of Rodney Dunsmore on vocals, Henry Elizondo on guitar, Alex Dominguez on bass and former ROTTING CORPSE/DEATH member Walter Trachsler on guitar along with newly recruited drummer Fidel Tagle from Texas metal outfit KILLAMORA. The band is scheduled to play the Thrash Assault 3 Festival in Germany on October 11 alongside HEATHEN, SADUS, SACRED STEEL, ACCUSER and several other thrash acts. The band will then do 15-20 dates accross Europe, with the first eight featuring support from Russia's WARHEAD. They will then return to Texas where they will take part in the Texas Metal Massacre tour with MILITIA ('80s cult thrashers with all-original line up) and TEXAS METAL ALLIANCE (which features members of RIGOR MORTIS and GAMMACIDE). That will be followed by a tour of Mexico and Central America in January. Then the band will do a South American tour in February, followed by a full Canadian tour in March and back to Europe in April.

DEVASTATION is hoping to have its fourth album — and first since 1991's "Idolatry" — out by May, to be followed by an extensive U.S. tour (the band's first in 18 years).

DEVASTATION — which released its debut LP, "Violent Termination", on its own Zombo Records in 1987, and two subsequent LPs (1989's "Signs of Life" and 1991's "Idolatry") on the Combat label — toured North America extensively during its five-year run with the likes of LAAZ ROCKIT, SEPULTURA, DARK ANGEL, DEATH, DEMOLITION HAMMER and MALEVOLENT CREATION but has never managed to make it overseas — until now. 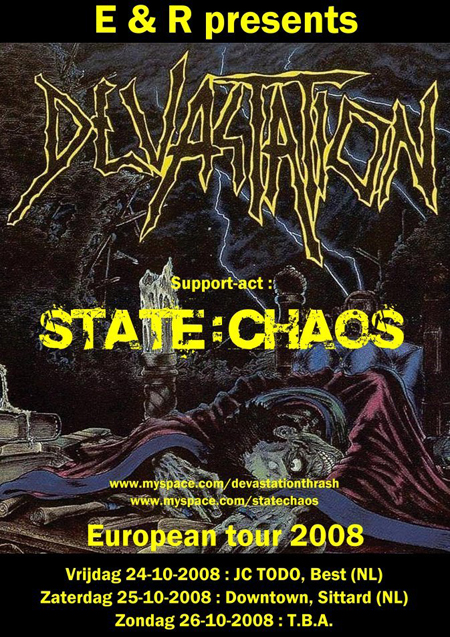