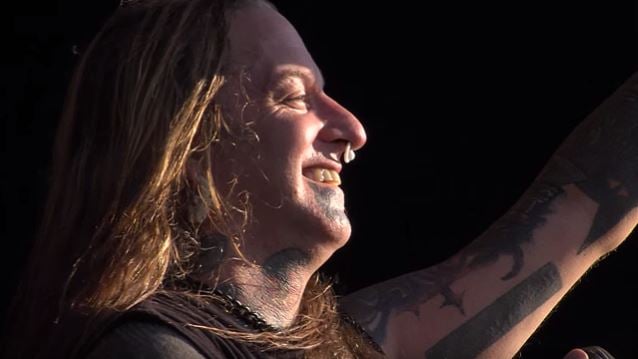 DEVILDRIVER frontman Dez Fafara told Australia's The Rockpit earlier in the year about the band's plans for a new studio album: "Over twelve years, we put out six records and we really never really took time off. Where most bands take a year and a half off between cycles, I'm kind of a road warrior and I never did that. And it became [clear] to me and everybody else around me, I was, like, 'Look, man, I need a little bit of time off. I need at least 9-10 months off music just to hang out with my family'. When that happened, [Dez's reactivated 1990s band] COAL CHAMBER ironically just came to the table and said, 'Hey why don't we do the record in between that time?' So DEVILDRIVER, by the time we come back, I'm recording a new DEVILDRIVER record at the end of this year. I'm sitting on twelve blistering songs that I'm in love with and I'm recording those [in] October-November this year and sometime next year, [in] spring/summer/fall, I'm going to release another DEVILDRIVER record and get right back in a DEVILDRIVER cycle. I don't want DEVILDRIVER sitting around too long but we definitely needed to take a break out of the markets and a break from touring for a little bit."

He continued: "I'll tell you now, it's definitely going to be something blistering! The music is on a different level right now, with what's going on with DEVILDRIVER."

DEVILDRIVER's latest album, "Winter Kills", sold around 11,000 copies in the United States in its first week of release to debut at position No. 32 on The Billboard 200 chart.