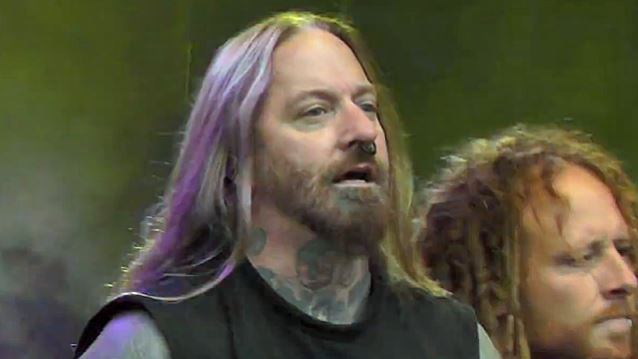 DEVILDRIVER Frontman: 'If There's Drama Or Problems Within My Camp, I'll Make Changes'

We Don't Care conducted an interview with DEVILDRIVER frontman Dez Fafara on July 28 at the MetalDays festival in Tolmin, Slovenia. You can now watch the chat below. A couple of excerpts follow (transcribed by BLABBERMOUTH.NET).

On the "family" vibe between the DEVILDRIVER members:

Dez: "When it's not a family, you lose members. Meaning, if there's drama or problems within my camp, I'll make changes. So for the first time in almost twelve years, I made some changes recently in the band. Now this is just a pleasure to be around — a big family, laughing, carrying on, having a great time. And I think that's what it's supposed to be."

On the DEVILDRIVER songwriting process:

Dez: "Say we put ten or eleven songs on a record, we usually write twenty-two. So, for me, I just go into it, I just write and then record. Then you decide what's good or bad. Because if you go into the process thinking, 'I just wrote these lyrics. It looks good. Oh, this is not good,' you didn't give it a chance. You have to record it. There's a song on [the latest DEVILDRIVER album] 'Trust No One' called 'My Night Sky'. We just released a video for 'My Night Sky' and we played 'My Night Sky' live. But when I wrote it, I thought, 'I don't know. I don't know if this is gonna work. I don't know if this is DEVILDRIVER.' But when we recorded it, the band, the producer, everybody was, like,' Oh, this is the song.' So you have to write, record, then you make the decisions."

"Trust No One" was released on May 13 via Napalm Records. The follow-up to 2013's "Winter Kills" marked the group's first release since the departures of guitarist Jeff Kendrick and drummer John Boecklin and addition of axeman Neal Tiemann and former CHIMAIRA sticksman Austin D'Amond.

"Trust No One" entered The Billboard 200 chart at position No. 43 with first-week sales of just over 12,000 units — nearly all from pure album sales.