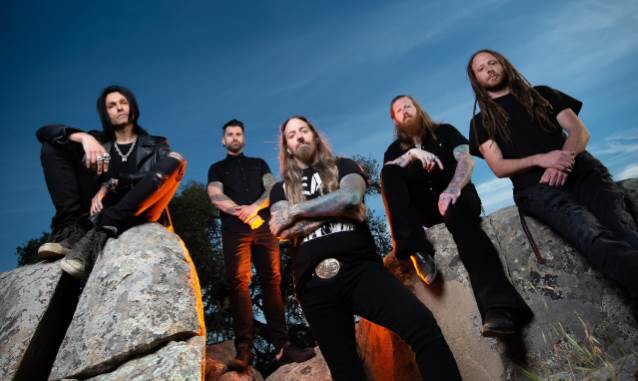 DEVILDRIVER Frontman: 'Right Now, I'm Not Really Scared By That Many Metal Bands In The Scene'

Kyle McGinn of Dead Rhetoric recently conducted an interview with DEVILDRIVER frontman Dez Fafara about the band's forthcoming "Outlaws 'Til The End: Vol. 1" full-length album of outlaw country-gone-metal anthems. A few excerpts from the chat follow below.

Dead Rhetoric: I know this is something you've been working on for a while. What gave you think of the idea of putting outlaw country songs in a heavy metal scope?

Dez: "From the inception of me listening to these songs in my childhood, I heard these songs with some additional paint on them. We were out with DEVILDRIVER and we were at the Mall Of America or something like that, and we did a photo with shotguns in our hands and stuff like that. A week and a half later, I was looking at that photo and thinking it was going to be at least three years before the next DEVILDRIVER record because nothing great comes easy. We've been working very hard on this record. So, I was thinking of what we could do at the same time, and it kind of struck me as an 'ah ha' moment looking at that photo and thinking of doing a record of outlaw country songs and doing it extremely heavy and try to get some guests. I was thinking Hank III, Randy [Blythe] from LAMB OF GOD, and John Carter Cash, and that was it. That was about two years ago — so the album has been about two, almost three years, in the making. Logically it was a total nightmare. I would never tell anyone to bite off this kind of a project. But we got through it and coming out the end and listening to the record — I love it."

Dead Rhetoric: Do you feel that DEVILDRIVER fans have an open mind when it comes to music outside the metal genre and are anticipating what this is going to be like?

Dez: "No, metal fans are notoriously closed-minded. That's why I have never been a purist. I have loved to kick sand in all their faces for the last 25 years. I've done it with COAL CHAMBER and I've done it with DEVILDRIVER. I always say I'm not a purist — I love all genres of music. I'm more influenced by BAUHAUS and BLACK FLAG than I am BLACK SABBATH and METALLICA. It's just the way that it is really. Within metal, there's always been this weird, purist thing where it's like, 'I only listen to metal!' But then half of those people are lying. They are going home and listening to other stuff. This was a project that's like, first of all, let's let everyone in Europe know exactly what it's like over here. Which is, if you are tailgating at a metal gig, you are going to hear METALLICA into Johnny Cash into BLACK SABBATH into PANTERA into Willie Nelson. People listen to outlaw country. Metalheads listen to outlaw country; that's just the way it goes. For the United States, let's do something that has really never been done. Let's show people the unification of two genres of music. A mashup of two genres of music, with four genres of singers. Let's really do something special within metal that kicks up some dust. That's what it's all about. You are going to wait three years for the next DEVILDRIVER record, so we are going to give you something extra special in between."

Dead Rhetoric: In one sense, do you feel that heavy metal is the modern-day version of a renegade/rebel? That it coincides nicely with outlaw country?

Dez: "You know, it used to have that feeling. Right now, I'm not really scared by that many metal bands in the scene. I can count on my hands the amount of bands that are actually volatile live and visceral live and on disc. I'm doing my own thing. I don't really look around at what other people are doing or pay attention to genres. I know within metal, there's this purist thing, and it's good to come in and do something that's not expected. I think that's the most important thing. Metal, because of the onslaught of everyone thinking they are heavy, it's watering down the genre down to a point that when I hear growling now, it just looks like milk to me. I just don't know what's going to happen now because of it. Of course, there's the seminal godfathers in the scene, and there are some killer young bands coming up doing heavy stuff. I have to really see where the genre goes in the next five-ten years. It's getting watered down right now. We'll have to see what's going to stick around and pop up. DEVILDRIVER has always been one of these bands that paid attention only to what we are doing. That's why we are still in the game and are where we are at, because we just pay attention to what we do."

Dead Rhetoric: There's been a couple of people that I've talked with now recently that say that the next five, ten years are going to be really pivotal for metal because it is in this state of flux where you have bands like METALLICA and SLAYER getting older and there's not really anyone stepping up to fill that same role in a sense.

Dez: "Right. And then you have the battle lines being straddled. You have bands that are coming at you that are heavy and dark, but yet there's one song that's brutal on the record, they have another one that sounds like SMASHING PUMPKINS all over the radio, there's another one that's on active rock. So, what are you? You are straddling the lines — you are telling everyone you are the newest on the scene and the most volatile thing happening, yet I'm over here on active rock and I hear your song and it sounds like SMASHING PUMPKINS. What's really happening? It's a tricky situation for bands coming up. What I say is stay true to yourself, stay true to your sound. Don't try to paint a fucking picture; just do what you do. If people listen to your music, then you are good to go! But I'm seeing that, and I'm seeing bands that are even heavier wanting to go for more active rock to keep things alive or get that fanbase higher. That's a strange situation too — you have been doing this thing for your whole life and now you aren't. It's a weird time in metal. I'm glad I'm in DEVILDRIVER at this point. We've always done only what we have wanted. We've done covers of [IRON MAIDEN's] 'Wasted Years', we've done covers of AWOLNATION's 'Sail', and they both work. We can be on one side of the fence or the other, but we aren't up in the fence, you know? I think that's what a lot of bands are doing right now. They are riding the fence. You can't do that."

Dead Rhetoric: You've kind of alluded to this, but what do you feel has been the key of your success over the years with COAL CHAMBER and DEVILDRIVER?

Dez: "I think it's just paying attention to what I want to do. A perfect example — there's a guy that I respect in this industry who called me about three weeks ago and was talking to me about 'Outlaws 'Til the End' — an album of country covers and saying he didn't think it was the right move for DEVILDRIVER or the brand. He said he hopes I'm okay and was basically stating that he hopes I don't fuck things up. I sent him the record, 24 hours later I got a three-page e-mail of him saying, 'I will never doubt you again. I apologize for coming off like I thought I knew it all. This record is a monster. Somebody is finally stirring things up.' You hear all these things and it's like, okay… cool. The bottom line that comes from that is that I do what I want, when I want, and that's how we've lasted. Some people follow me musically because they know I'm going to do what I want to do."

You can read the entire chat at Dead Rhetoric.