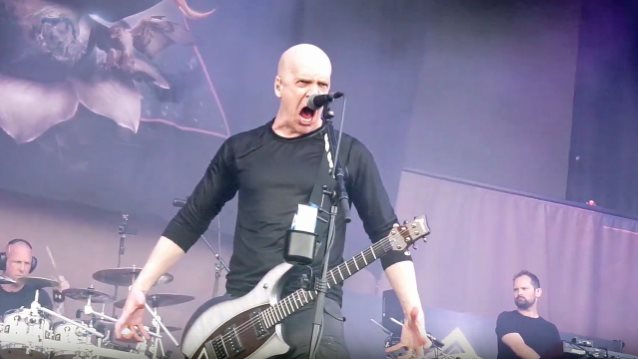 Kristina Wolf of Allschools conducted an interview with Canadian musician/producer Devin Townsend at this year's edition of the Summer Breeze festival, which was held August 16-18 in Dinkelsbühl, Germany. You can now watch the chat below.

Asked if hair is directly related to "metal sexiness," Devin said: "Is there such a thing? Metal sexiness? A bunch of sweaty dudes in black clothes? This is possibly the most sexless genre that you could find. But I think it makes it easier to manipulate yourself in middle age, because there's no real need for you to pursue sexiness as a fundamental aspect of your work. So you're talking to the wrong guy when it comes to that. Sexiness, for me, is… [long pause]… I don't know… What is sexiness for me? Food."

Devin also talked about the best time for balding men struggling with the decision to shave their heads to finally give up on the battle to save their thinning hair. He said: "Well, I kept my hair long past its due date. When I was bald, I still had long hair, and I did that primarily because I had a good friend that used to try and make fun of me for going bald. So I thought, 'Oh, fuck it!' The best thing to do is to just grow it to the point where you frame it, so it's almost like arrows pointing to your bald spot. And then after a while, it just started smelling terrible and I just got sick of it. So probably the shortest answer [to the question of when the best time is to shave your head] is 'when you get sick of it.'"

DEVIN TOWNSEND PROJECT's latest album, "Transcendence", was released last September. The follow-up to 2014's "Z2" double album (half of which was made up of the DTP full-length "Sky Blue"), it saw the award-winning Townsend exploring a relatively new way of working, collaborating with the entire DTP band during the writing stages of the record.