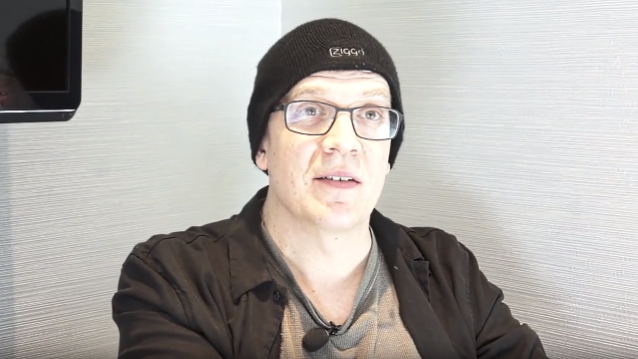 DEVIN TOWNSEND: 'I'm Much More Sensitive Than I Had Thought'

Canadian heavy music artist Devin Townsend spoke to France's Loud TV about his latest album, "Empath", which was released on March 29 via InsideOut Music. Asked to explain the record's title, the 46-year-old musician said: "I realized that over the past decade, since children were born and I had people pass away and all this, I realized two things. One, I'm much more sensitive than I had thought. I've always known I was sensitive, but I didn't realize how much it was a problem, in a sense, because I tend to have a hard time not absorbing situations. Like, if somebody's stressed, I feel stressed; if someone's angry, I feel angry; if someone's sad, I feel sad; which is unhealthy after a while. So a lot of this process, I tried to learn how to protect myself from that way of being. And through trying to learn techniques — meditation really helps, of course, but what I also realize is that I feel like I've had a wall up emotionally, that I've been able to intellectualize what I'm feeling rather than actually just participating in it. As opposed to denying myself emotionally, what I decided to do instead was explore my relationship with all these emotions, and that became something that allowed me to have all these different feelings on the record."

He continued: "Usually what I do is, it's one thing — it's this one style, just one style. But because the theme was about emotions, it became acceptable to me, on an artistic level, to have it, 'Okay, it's this one and this one and this one and this one and this one and this one.' Then the flow of the record ended up being indicative of — in my feeling, at least — what life is like for me. As an analogy — it's music, clearly. But you might be in one frame of mind, and then, all of a sudden you hit another frame of mind, and then after that, you're quiet, and then, all of a sudden it's a weird day, and all of a sudden you're really happy and then you're sad and then you're angry. And to be able to utilize all these different emotions in that way allowed me to put a lot of my entire career into one place, and it was really healthy for me. And it was healthy for me because 'Empath', as a project, as a theme, as a piece of work, also included the sentiment of, 'You have to let it go. You can't let any of these things define you or your work or you as a person or have your identity wrapped up in your work.' And so I tried to really be cautious throughout that no matter where the record goes, it's always with an element of hope, I guess, an element of care. So even when it's brutal, like STRAPPING YOUNG LAD style in 'Hear Me' or 'Singularity' or whatever, it's almost like that character in the story, which is a part of me, he's just another one of these brothers. It's not like he's a bad guy — he's just one of the people. It's, like, 'That's the STRAPPING guy,' and, 'That's the CASUALTIES OF COOL guy,' and, 'That's the Epicloud guy' and the 'Ziltoid guy' and the 'Ghost guy.' They're all equal, in a way, and at the end of it, none of them are that important, in a way — it's what it is together."