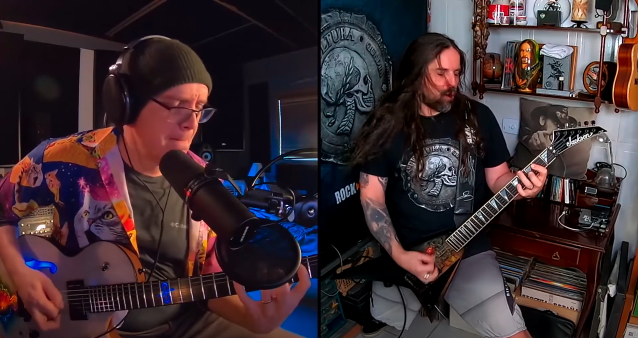 Canadian singer, songwriter and producer Devin Townsend recently teamed up with the four members of SEPULTURA to record a quarantine version of SEPULTURA's "Mask", taken from the 2011 album "Kairos". He also took part in a live chat with SEPULTURA guitarist Andreas Kisser and vocalist Derrick Green. Check out video below.

Last month, Devin released "Empath - The Ultimate Edition". This comprehensive version of 2019's acclaimed album contains the original record and bonus disc across 2 CDs, plus 2 Blu-ray discs. The first Blu-ray contains the 5.1 Surround Sound mix by Devin, with visuals for the full record, plus a stereo visualizer. The second Blu-ray contains a raft of bonus material, including "Acoustically Inclined - Live in Leeds", a recording from his April 2019 acoustic tour where he performed tracks including "Love?", "Deadhead", "Thing Beyond Things" and more. It also features the full "Empath" documentary, a "Genesis 5.1 Mixing Lesson", a full album commentary and more. The four discs sit inside a beautiful art-book that contains new liner notes and images from the making of the album.