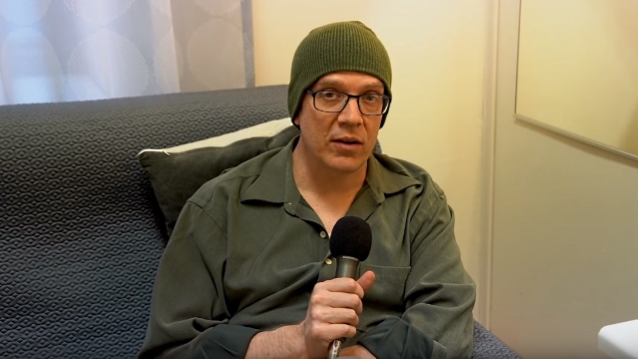 DEVIN TOWNSEND On NICKELBACK's CHAD KROEGER: 'I Thought He Was A Genius'

Samuel Järvinen of Kaaos TV conducted an interview Devin Townsend prior to the with Canadian producer/musician's March 29 concert at Savoy Theatre in Helsinki, Finland. You can watch the entire chat below. A few excerpts follow (transcribed by BLABBERMOUTH.NET).

On the first thing that comes to mind when he thinks of heavy metal:

Devin: "Red. I tend to equate everything that I do to a color. When I think of STRAPPING YOUNG LAD, I think of red because I think it was at a period in my life where I was focused on anger and focused on learning about anger, I guess, subconsciously."

Devin: "I have it and I battle with it. But it's okay. I think that ultimately, if there's anything that came from India that was really positive that was a sense that how fortunate one is to have the time to be depressed. When we were there, it's like there's people there where you'd say, 'I'm in the midst of life drama or I'm depressed or something.' It's like 'Really? I'm trying to find something to eat.' I don't think I have the type of depression that is debilitating, but there's a low-lying sense of it that has been present for a long time. Over this past year, where I've given myself the opportunity to not put on a false face… A lot of the last few years has been me being, like [smiles and gives thumbs up]. When I stopped that, I realized there's been some ups and downs and I think it's very healthy to delve into that and try and find solutions for it as opposed to pretending it doesn't exist."

Devin: "Chad [Kroeger]. He sang a little harmony on 'Hear Me' and we spent a couple of days talking and spending time together and I was fascinated by his brain. I thought he was a genius. I haven't met many of them, so to be present with someone like that was really exciting, but also confusing because I had made assumptions on his band and the nature of his work that when I met him, I recognized I was deluded in my own ways and you fall into these patterns of what other people think and jealousy and all these sorts of things. At the same time, they are certainly not my favorite band. But what they do they do because it's what they are meant to do and the thing that I took from that experience was that's what I should be doing, too. By following that same process, what comes out of me is 'Empath', right? Chad is intense, and I realized that after spending time with him why he is able to have the success that he's had because I think he's able to handle that. I couldn't do that. It's too much."

Devin: "'Me' is the word that springs to mind, which is weird because I don't enjoy playing guitar solos. However, when I was a teen, that's all I wanted to do was play guitar solos. I just wanted to be a lead guitar player. I wanted to be better than everybody; I wanted to have all the technique, I wanted to do all that stuff. Then I joined Steve Vai's band [in 1993] and all of the sudden, I was like 'I don't want to do that anymore.' It was humbling and it was liberating because he was so much better than I was. It was liberating as well because I realized by watching him do it that with my skillset, there would only be a certain amount of things that I could say with the guitar, so I chose to look other places for my expression and it's kind of strange in that it used to mean so much to me to play solos. Now I'm fine not to play solos at all — legitimately fine with it."

Devin: "Brutality. It forces you to contend with parts of your nature that prior to having children, I was conveniently able to overlook either by saying, 'I'm psychologically incapable of handling those things therefore I shan't.' Or when you go back to love, the idea before kids for me was romantic love was the same as love. Then when you realize that actual love includes death, then there is a real sense of having to face your fears. What I found most intriguing was prior to children, I had very little reason to look after myself. So I was self-destructive, I think, in a lot of ways and I attributed a lot of my self-destructive thinking to alcohol or drugs. After I had kids, I decided to become completely abstinent from everything. I realized recently that a lot of the things in the past that I attributed to some psychological misfunction in my own mind, where things I conveniently I allowed myself to not face. All these things, like participating in emotions authentically is not easy."