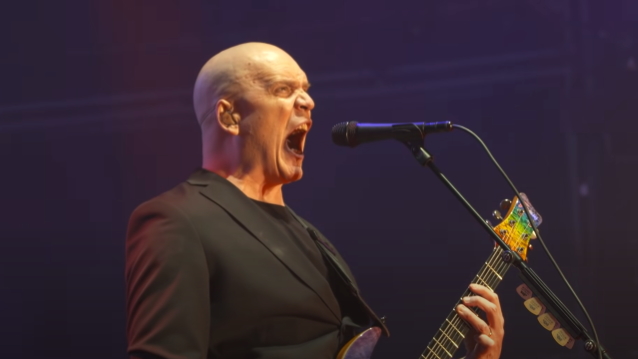 In a recent interview with the "Breaking Absolutes With Peter Orullian" podcast, Canadian singer, songwriter and producer Devin Townsend was asked if he ever had any formal training to help him effortlessly flip between orthodox choral singing techniques and guttural screaming. He responded (as transcribed by BLABBERMOUTH.NET): "I never wanted to be a singer — ever. When I was younger, I just wanted to play guitar. And then when we looked for singers, when we went hire singers as kids — when we were teens — they were just the worst of us; almost without fail, they were just terrible people. And I remember thinking, 'Okay, well, I'll just sing until I can find somebody.' And I had many jobs as a teen too — I worked in dozens of restaurants or stainless steel fabrication or surboards or industrial bakeries — just endless jobs in which I had menial tasks to perform, but usually on my own. And so in that scenario what I would typically do is sing. And although I had a certain degree of facility when it came to pitch — I don't have perfect pitch; maybe I've got a degree of relative pitch, but I could sing in tune, is the bottom line. So starting from that, I was able to sing along to the records that I was listening to while I was at these jobs. The one that was the most, I guess, memorable for me is I worked as a prep cook at this restaurant. So you cut up the chicken, then you cut up the squid, or whatever the thing it is, and then you have to go to the walk-in freezer to organize it. You put the dates on it, and you're in there for 30 to 40 minutes at a time. But it's this soundproof sealed room. And I think I was so insecure about singing based on just not wanting to appear like some of these characters that I had run into as a kid, I thought, 'Well, this could be an opportunity to practice it.' So I would just go into a walk-in cooler and just scream in a wall of chicken. And then eventually, when I started making demos, I sang on it. And that was no more of a goal for me than just a practical problem-solving exercise."

Devin continued: "Then I got signed to Relativity, and then Steve Vai heard that, after I had been signed, and contacted the A&R guy and said, 'I would like him to sing.' And I'm thinking, 'Oh, shit. I just wanna play bass or play guitar or something.' And I certainly credit Steve for helping me in many ways when it comes to learning what I want to do, and also what I don't want to do, to a certain extent. But he was very proactive in teaching me certain things about singing. Then I had experiences after that where I worked with somebody who had been in a very famous band, and he said, 'Well, if you're gonna sing, you're gonna wanna maintain your voice. And in order to do that, here's some exercises.' And then here we are 30 years later, and I'm a singer, I guess."

Last month, Devin released a new album, "The Puzzle". The LP is accompanied by five-part documentary. In the first installment of the series, dubbed "Making The Puzzle", he details his creative process and how the COVID-19 pandemic affected it.

Devin's next release will be the "Lightwork" album, due in the spring. The effort was recorded with producer GGGarth Richardson at his The Farm Studios in Vancouver, British Columbia, Canada.

Three years ago, Townsend said that he "still can't listen" to "Sex & Religion", the 1993 album he made with Vai. Released under the band name VAI, the disc saw the legendary guitarist joining forces with a band of "monster musicians" — including drummer Terry Bozzio and bassist T.M. Stevens — to create an effort that was radically different from 1990's "Passion And Warfare". The band split up after the album was finished, and Vai subsequently toured only with Townsend and several session drummers and bassists.