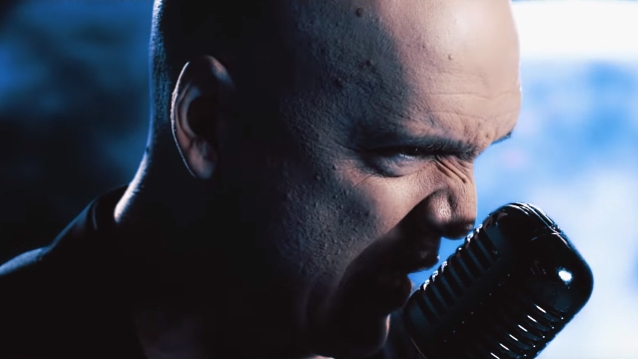 DEVIN TOWNSEND Says It's 'Liberating' To Perform Without Backing Tracks

Alex Haber of Heavy New York recently conducted an interview with Canadian musician/producer Devin Townsend before his February 29 concert at Warsaw in Brooklyn, New York. You can watch the entire chat below. A few excerpts follow (transcribed by BLABBERMOUTH.NET).

On whether each studio album he releases is representative of where he currently is as an artist:

Devin: "I think so. Yes. I think a lot of what has been interesting is that my work is put into categories because it needs to be categorized, I suppose, but what ends up happening ultimately is referred to as a certain type of genre, like 'prog metal' or 'thrash' or whatever. But I'm just reacting to trying to figure out how to be a more functional human. [Laughs] In just trying to react to the process of being myself, it just results in me…I don't know maybe just music was a convenient way for me to express myself as a child who didn't find himself openly expressive. So, yes is my answer. [Laughs]"

On where he finds inspiration:

Devin: "I prefer it when there's a good environment. Being born and raised in Vancouver, a lot of my process is, I think, directly involved with nature or weather specifically, rain and the mountains and what have you. There's this dramaticism that comes with that always implied a type of size. A couple of times that I've attempted to live in Los Angeles, whatever comes out of me is not something I feel particularly able to relate to, I guess. I think so, yeah. But then again, sometimes inspiration hits you in the middle of the night. I'll just hum a melody into my phone and mail it to me in the four in the morning. Wake up with a text message from myself with just a bunch of mumbled melodies. But I think as artists you're just antennas for sound and certain combinations of events and certain combinations of personalities and circumstance just resonate in ways that I think you're able to pick melodies out of. Wherever it is, I'm happy to take it."

On whether his mind frame changes for each project he works on:

Devin: "The aesthetics of each environment and each circumstance is very different but that also has a lot to do with the age that I'm at. The person I'm at 25 is much different than the person I am at 48. The process in opposition of that statement has almost been identical since the beginning. I guess the way to describe it as a child, in my family, we weren't actively encouraged to express ourselves emotionally. Yet it was almost viewed as uncouth in a sense, yet music was something that we could get away with. It was like a loophole. Being somebody who is wired to be very sensitive, I guess, to my environment and just in general, emotional, it became an avenue that I hardwired everything to. By the end of my trip, it was like everything was just able to come out in that way. I have found that since the beginning, since STRAPPING [YOUNG LAD], PUNKY BRÜSTER, any of this stuff, the process is the same, but the aesthetic is different."

On whether there is a different energy for him when it comes to playing live and recording in the studio:

Devin: "It's a separate art, for sure. However, this particular show that you're about to see is new for me. Typically, what I've done in the past is because I'm such a perfectionist with my work, I strive for that live, but the older I get, the more I am aware of just how imperfect I am as an artist, as a singer, as a performer. I'm trying to embrace that on this run. There's no real setlists. There's no production. There's no video walls. There's no lighting designer. There's nothing. There's just highly proficient musicians and a bevy of songs that I kind of choose from once I'm up there. There's a fair amount of improvisation that goes along with it, too. That has been hand-in-hand with the process as well because by allowing myself to be without a safety net allows me to recognize psychologically that I'm capable of handling that. I think that my insecurity in the past tends to dictate certain psychological processes: 'You're incapable of that. You can't do this. There's no possible way you'll be able to rise to this occasion.' Forcibly putting myself in a situation that doesn't have a safety net has yielded some really interesting results and that's what you're going to see tonight."

On whether "safety" can be an enemy in terms of creativity:

Devin: "Specifically nowadays where concerts are meant to be and perceived to be, from what I can tell, very much about the spectacle. Everything is to backing tracks; everything is to click tracks; everything has the choreography. As much as I like that and as much as I've tried to do that in the past to a certain extent, it's really liberating for me to not have to do that this time. It becomes human beings playing music. I think that's really important."