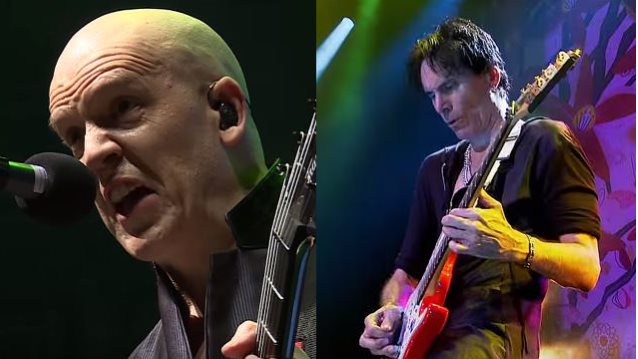 According to EonMusic, Steve Vai and Devin Townsend will reunite on stage for the first time in almost a quarter century at the Starmus Festival IV: Life And The Universe, set to take place June 18-23 in in Trondheim, Norway.

Vai and Townsend originally teamed up in 1993 for Steve's "Sex & Religion" album, which was released under the band name VAI. The disc saw the guitarist joining forces with a band of "monster musicians" — including drummer Terry Bozzio and bassist T.M. Stevens — to create an effort that was radically different from 1990's "Passion And Warfare". The band split up after the album was finished, and Vai subsequently toured only with Townsend and several session drummers and bassists.

Speaking at the Metal Hammer Golden Gods Awards, which took place Monday night (June 12) in London, Devin said about his upcoming collaboration with Vai: "We're doing one of my songs with an orchestra, and I'm singing with him for the first time in twenty-five years. I'm also playing some of his stuff.

Devin went on to talk about playing at the unique event which celebrates science and the arts. "It's a festival that's based around physics and science, and I really enjoy that," he said. "[Being] forty-five years old and sober and [having] kids and all that, I really respect that sort of process. I really like the idea that something that is maybe stereotypically known as being a knuckle-dragging genre is able to participate in things that are really beautiful like this and contribute to it."

When asked which material from the divisive release the pair would be performing, Townsend said: "We're just doing one song. We've known each other for many years, so to be able to get together like that is really cool."

More than a decade after their initial musical partnership, these two creative giants again crossed paths. In 2005, Vai played a guest guitar solo on Townsend's "Synchestra" album, and in 2013, was cast as narrator on Townsend's "The Retinal Circus" live album. When Vai decided to record last year's "Modern Primitive", which featured music he wrote in the period between his debut solo album, "Flex-Able", and the aforementioned "Passion and Warfare", he enlisted Townsend to sing on a song called "The Lost Chord".