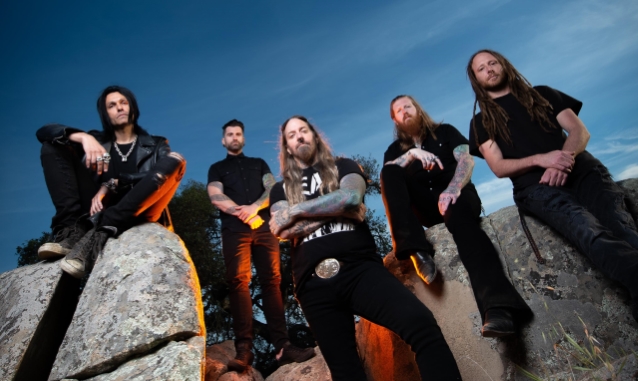 DEZ FAFARA 'Broke All The Rules' With Upcoming DEVILDRIVER Album

Dez Fafara has confirmed that DEVILDRIVER has completed work on its new album with producer Steve Evetts (EVERY TIME I DIE, THE DILLINGER ESCAPE PLAN). The follow-up to 2016's "Trust No One" will be a staggered-release double album, with the first part scheduled to arrive in early 2020.

Fafara told Australia's "Everblack" podcast in a new interview (hear audio below): "You're gonna get a record next year — early next year — and then the following year… So you'll get one record from us in 2020, another record in 2021, you'll get an 'Outlaws ['Til The End: Vol.] 2' in 2023, and then possibly another record in 2024 or 2025 from DEVILDRIVER. And then I'm gonna take a prolonged break that could last four or five years from there. So we're really putting out great product right now."

As for the musical direction of the new DEVILDRIVER material, Dez said: "Obviously, we're not doing press on a new record right now, but what I can tell you is this: if you're a fan of COAL CHAMBER, if you're a fan of DEVILDRIVER, you're gonna get both things put together. I broke all the rules with the new DEVILDRIVER record. It's twice as heavy, it's twice as groovy, it's bigger hooks than I've ever written in my entire life. And I do believe that this double staggered release is the record of our lifetime.

"I had somebody tell me yesterday that was a big fan of 'Trust No One', which was our record before we did the country outlaw record, that the music that they heard — because they were listening to a link at our guitar player's house — and came back and said, 'This sounds like almost a new band,'" he continued. "So this is a great thing, after years of trying to actually redefine your sound. And I think that people are gonna just… you're gonna love it, man.

"I'm having a very hard time [deciding] what songs go on which record, because every one of 'em is over the top. If you can't find a B-side, that's a great, great thing to have happen.

"If I could share it with people now — just share it online — I would, because some of the stuff, vocally, that I'm doing with this is incredible. And the music that I've got behind me is some of the most incredible music I've ever written to — ever. So to be able to say that, with the players that I've had in my band in the past, this is a very, very good thing for a band that's existed since early 2000s."

Last year, Fafara told Metal Wani that DEVILDRIVER had written 48 songs for its new album. He went on to say that the next DEVILDRIVER LP would be "the record of our career. This will be record that other artists judge us, as well as themselves, on once they hear this," he claimed.

DEVILDRIVER's full-length collection of outlaw country-gone-metal anthems, "Outlaws 'Til The End", was released in July 2018 via Napalm Records. The disc was described in a press release as "both a startling curveball and a ferocious statement of individuality from a band who have been a constant and effective force in the heavy metal world for the best part of two decades now."