Dez Fafara says that DEVILDRIVER will start performing material from COAL CHAMBER in part because he realized the latter band probably wouldn't tour or make music ever again.

Speaking to Full Metal Jackie's nationally syndicated radio show, Fafara stated about DEVIDLRIVER's plans to play COAL CHAMBER songs (hear audio below): "Well, [the idea to do] this really didn't come from me; this came from a phone call. At about 11:30 at night, my phone rang with a blocked number — I usually don't pick those up, and I did — and it was Glenn Danzig. And Glenn has been a longtime friend of mine. He was the first tour I ever had. He's a guy I respect greatly for being in the industry for a very long time and doing things his own way. And what he said to me is, 'Put me on speakerphone and make sure your wife Anastasia is listening.' And I thought, 'Okay. Here we go. I don't know what's going on here.' He asked [DEVILDRIVER] to be on [the] 'Blackest Of The Black' [festival]. And then he went into saying: 'Why have you been running from the music that made you? When I left the MISFITS, when I was with DANZIG, I was doing SAMHAIN songs, I was doing MISFITS songs… And when Rob Zombie left WHITE ZOMBIE, he was doing WHITE ZOMBIE songs. So why have you waited this long?' And I told him I thought it would be better if when the band finally got back together, if we ever did, that I kept that to myself, And I think after releasing 'Rivals' two years ago — it came out to critical acclaim — going around the world with those guys, [and] most of the shows were sold out, I realized that a lot of people wanted to hear that music. And then also, at the end of that stint, [I] realized I don't think that we're gonna tour ever again together and probably never gonna make music together again. So now do I just put those songs down for the rest of my life, the songs that I wrote, the songs that made me, the songs that people want to hear? No. I go do 'em — much like I'm doing the country [covers project with DEVILDRIVER] — I do 'em how I've always heard 'em, which is two guitars, double-bass kick drum. I'm hearing those songs even heavier and tighter than they are. So it made me embrace it and say, 'I'm not gonna run from this anymore.' So will we do it every tour? Probably not. It's gonna be select shows, select place when we'll do three or four COAL CHAMBER songs. They've gotta be the right ones. But once you hear 'Loco' with two guitars and double kick and you hear it tight, you're gonna understand why I'm doing it.

DEVILDRIVER is currently working on an outlaw country covers album, "Outlaws Till The End", tentatively due in early 2018. The disc will contain thirteen "insanely heavy, swinging badass outlaw tracks by some of the best outlaw country artists," including Willie Nelson, Johnny Cash, Waylon Jennings and Johnny Paycheck, according to Fafara 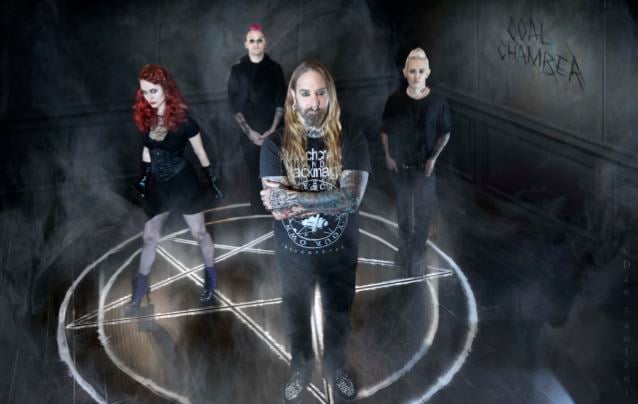