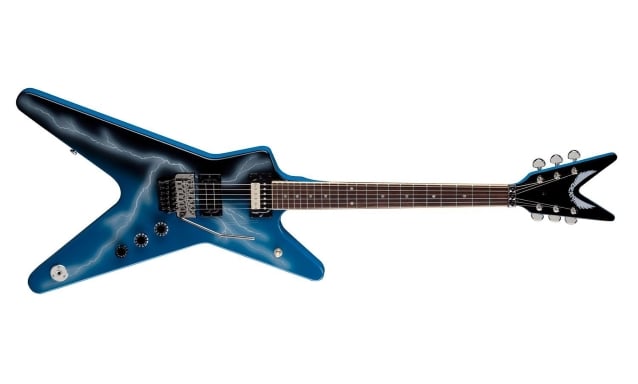 According to Courthouse News Service, an appeals court has put an end to a lawsuit filed by the instrument designer who alleged that he hadn't been paid for sales of the late PANTERA guitarist "Dimebag" Darrell Abbott's classic "Dean From Hell" guitar, which he said he helped create.

In April 2017, Buddy Webster, who goes by the name Buddy Blaze, filed the lawsuit against Armadillo Enterprises, the parent company of Dean Guitars, and Dimebag's estate, claiming that "Dean From Hell" was designed in the 1980s after Webster met and developed a friendship with Dimebag.

In November 2018, a judgment was entered in favor of the defendants in the Middle District of Florida, where the suit was transferred in July 2017.

There is a three-year statute of limitations on copyright actions, and because Webster's dispute was about copyright ownership, the window in which he could file his lawsuit had long passed, the judge said while dismissing the case.

In January, Webster's attorney told a three-judge 11th Circuit panel that the designer was entitled to a trial and asked the judges to reverse the lower court's decision. Specifically, the attorney argued that the statute of limitations on the copyright infringement claim had not yet run out because Dean Guitars is continuing to copy the lightning storm graphic, allowing Webster to bring suit years after the initial infringement occurs (though he is only entitled to damages for the latest three-year period).

When Senior U.S. Circuit Judge Julie Carnes pointed out that Webster "must have known there was a problem" years ago since he never received royalties for the design from Dean Guitars or from Abbott's estate, the designer's attorney said that Webster avoided legal action because he was afraid of angering Abbott's fanbase following the guitarist death. Dean's attorney dismissed that explanation, telling the court: "PANTERA was a beloved band then. They are now. So why couldn't he sue back then?"

In an 18-page opinion, the 11th Circuit on Thursday (April 16) agreed with the federal court that Webster's claim for copyright ownership accrued as early as December 2004 or as late as April 2007, when he knew that his ownership rights over the lightning storm graphic were being violated by Dean Guitars' reissue sales.

In his original lawsuit, Webster said that he was living in Arlington, Texas in the 1980s when he "befriended a young local guitarist named Darrell Abbott. Abbott was incredibly talented and was a member the band 'Pantera'," the lawsuit added. "One of Darrell Abbott's guitars is a model made by the Dean Guitar company, known as a Dean ML, which he won in a local contest.

In their June 2018 joint motion for summary judgment, Armadillo Enterprises and Dimebag's estate wrote: "The problem for Webster is that he didn't actually paint and create the graphic — a person named Craig Patchin did in around late 1985-early 1986. Even presuming, for purposes of this motion, that Webster did what he said he did relative to the Lightning Graphic (i.e., conceive the 'idea' and give Patchin some basic instructions regarding how he wanted the guitar painted),Webster's 'contributions' are nothing more than uncopyrightable ideas and concepts communicated to the real author of the work. Indeed, Webster admits, as he must, that he wasn't even 'physically there' for 'the artistic work.' Under controlling Eleventh Circuit precedent, the person responsible for fixing the 'artistic work' into a tangible medium of expression — Patchin — owns the copyright in it. Consequently, as a matter of law, Webster cannot establish that he is the sole or joint author of the Lightning Graphic, and his copyright is thus invalid. Patchin, who Webster admits is a 'trustworthy,' 'wonderful,' and 'utterly honorable' person, recently assigned his rights to the Lightning Graphic to the Estate, making the Estate the work's sole owner."