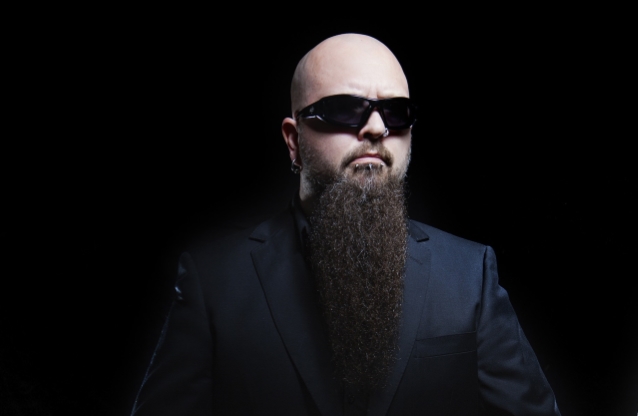 DIMMU BORGIR and INSIDIOUS DISEASE guitarist Sven Atle Kopperud (a.k.a. Silenoz) went on "Side Jams With Bryan Reesman" to talk about his love of motorcycles, Norwegian nature, and doing charity work.

At the beginning, there were audio problems that delayed the interview by at least 10 minutes. Silenoz said it was because of his "electrical curse". "It's been with me for as long as I can remember," he explained. "In the beginning, people didn't believe me when I said, 'There's got to be something with me and electricity.' Because there's tons and tons of episodes happening through the years. When we did the orchestra show at the Oslo Spectrum, we had to run through all the show before. And for some reason, out of nowhere, my wireless didn't work so I had to play on cable. I was really mortified in the sense that [for] the biggest show in my whole life, maybe I have to play on cable on stage. We couldn't figure out what was wrong. My guitar tech at the time said after the run through that, 'I'll fix it. Don't worry about it. Just get ready, and I'll fix it for you.' I was, like, 'How can you fix it when you when you don't know what's wrong?' So I was freaking out a bit. An hour later or so when the intro goes for the actual show, there's no turning back, and I don't know yet if I'm going to get the guitar with the cable or the wireless. But then he comes with the guitar and the wireless is fixed. I asked him, 'What was wrong with it? What happened?' 'I have no idea, but it's working now.' 'But how do we know if it's gonna work through the whole show?' 'We don't know. But it's working now.' So that's just one out of many, many examples."

The guitarist also talked about being part of a biker club and how that compares with life in DIMMU. "It's pretty much the same thing," Silenoz said. "Obviously, I've been in the band longer than I've been in the club. But the foundation is the same in that you look out for one another, and you try to utilize every person's strength instead of their weakness. That's what we do in the band as well. We know our place in the band after so many years, and that's what we have in the club. Everybody knows their place, and it feels safe in a way, you know, it feels good. Since we do a lot of charity work as well, then you have to have that initial trust toward one another."

Silenoz was asked about stereotypes that people have of bikers and replied: "A lot of outsiders think that motorcycle people are thugs because that's the stereotype for movies or whatnot. But there are thugs everywhere, in every part of society. We work against the injustice and unfairness from the outside when it comes to the biker world as well. I think it's very important to show that we are pretty much normal human beings with more specific interest for bikes and brotherhood. That's something a lot of people don't understand because they don't have that in them. When you go into a club or you prospect for a club or you prospect for a band, it's pretty much the same thing. You cannot just walk in because you have to be trusted. That goes also for the band. Over the years we had so many lineup changes, and some of them we had to do on the spot, basically, to be able to do shows. Then after a while, you figure out the music similarities between people in the band works fine but maybe the personalities clash. And if you're going to be on the tour for six weeks, then it's important that you actually get along on a personal level, maybe more so than anything else. So I think it's just like in any place in society, there should be a test period, a trial period, to show if you're the right person. Everybody has talents, obviously, but maybe people don't have the talent for being in a group or in a club."

Silenoz also spoke about the charity work that his motorcycle club does, including helping people around the holidays who need food and shelter. They also offer support and aid to military veterans. "We feel that when veterans come home from service, in Iraq or Afghanistan or wherever it is, they come home to basically nothing," Silenoz said. "They are f-ed up in the head from being in war and war zones and seeing all the bullshit. There's basically no net for them when they come home. They get a pat on the shoulder and a medal but there's still stuff stuck in the head. On the new INSIDIOUS [DISEASE] album, we wrote a song called 'Soul Excavation' [in] which we try to deal with the PTSD thing. So there's intertwining of different stuff going on."

DIMMU BORGIR's latest album, "Eonian", was released right in time for the band's 25th anniversary in 2018, about eight years after its predecessor, "Abrahadabra". Since then, the infernal core trio consisting of Silenoz, Shagrath and Galder has played various tours all around the world, including shows at leading metal festivals such as Wacken Open Air and Hellfest.