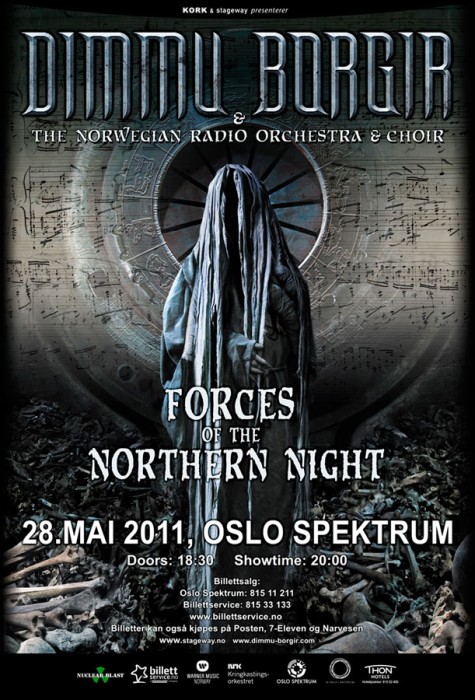 Norwegian symphonic black metallers DIMMU BORGIR performed one very exclusive show on May 28, 2011 at the Oslo Spektrum in Norway with a special, never-to-be-repeated setlist with 53 members of KORK (the Norwegian Radio Orchestra) and 30 members of the Schola Cantorum choir, who were musical guests on the band's ninth studio album, "Abrahadabra".

The concert, dubbed "Forces Of The Northern Night", was professionally filmed and was broadcast as part of a one-hour documentary in June 2011 on NRK (Norwegian Broadcasting Corporation),the Norwegian government-owned radio and television public broadcasting company and the largest media organization in Norway.

In a new posting on DIMMU BORGIR's Facebook page, the band writes, "We have noticed that a few different bootleg versions from the 'Forces Of The Northern Night' show in Oslo last year is in circulation and that it has also been falsely advertised for sale on various distribution sites on the net. We can assure every anticipating and impatient fan that this is nothing more than stuff filmed by the audience or in best case footage taken from the NRK TV broadcast in very low quality. We're still working on the DVD (release date to be announced) which will, of course, consist of the whole setlist, including documentaries and bonus material etc... Not only that but the sound has been totally remixed and enhanced since the broadcast and the footage has also been re-edited. We just want to let you guys know before you decide to waste your money on something that's fake and not an official DIMMU BORGIR DVD release."

Photos of the "Forces Of The Northern Night" concert from NRK:

"Abrahadabra", the ninth album from DIMMU BORGIR, sold 9,400 copies in the United States in its first week of release to land at position No. 42 on The Billboard 200 chart. The band's previous CD, "In Sorte Diaboli", opened with 14,000 units back in May 2007 to debut at No. 43. This was more than double the 6,400 first-week tally achieved by its predecessor, "Death Cult Armageddon", which came out in September 2003 and landed at position No. 169 on The Billboard 200 chart.

The word "abrahadabra" (which roughly translates into "I will create as I speak") first publicly appeared in Chapter III of "Liber AL vel Legis" (commonly referred to as "The Book of the Law") written by Aleister Crowley in Cairo, Egypt in 1904.