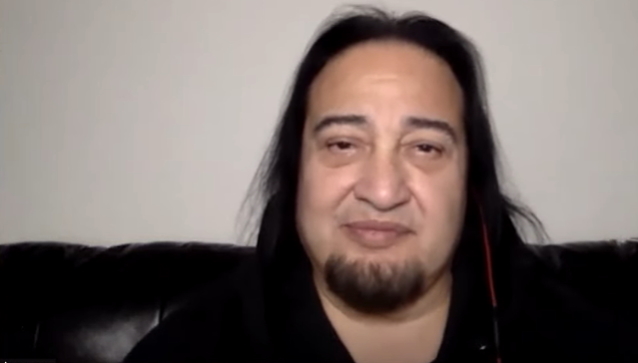 In a new interview with the "Everblack" podcast, FEAR FACTORY guitarist Dino Cazares once again opened up about his band's search for a new vocalist following the departure of Burton C. Bell more than two years ago. Regarding the decision to keep the new singer's identity a secret for so long, he said (as transcribed by BLABBERMOUTH.NET): "Well, everybody's gonna know [who he is] by next year because we have touring starting end of February. So everybody will know then. I just hope people are not disappointed because it's nobody famous. Everybody's, like, 'Who is it? Is it James Hetfield? Is it Mike Patton? Is it Corey Taylor?' And I'm, like, 'No. Nobody like that at all.' [Those guys have] got their own bands, respectfully — they've got their own things going on."

As for what qualities he was looking for in the new FEAR FACTORY singer, Dino said: "You want a person who's gonna be able to respect the legacy that we started 32 years ago. And so you want that person to be able to sing those parts as they were meant to be. But moving forward with newer stuff, he's gotta somewhat have his own identity."

Cazares also confirmed that he and the new FEAR FACTORY vocalist have begun work on material for the follow-up to 2021's "Aggression Continuum" album.

"It's going great," he said. "We just started pre-production, so we just started writing. We're about four songs in. So it's great. Everything's flowing really good. We've been working on it for about two and a half weeks. This writing so far has been pretty exciting. The four tracks that we do have… I don't know how to say it — it's classic stuff."

"Aggression Continuum" was released in June 2021 via Nuclear Blast Records. The LP, which was recorded primarily in 2017, features Cazares and Bell alongside drummer Mike Heller.