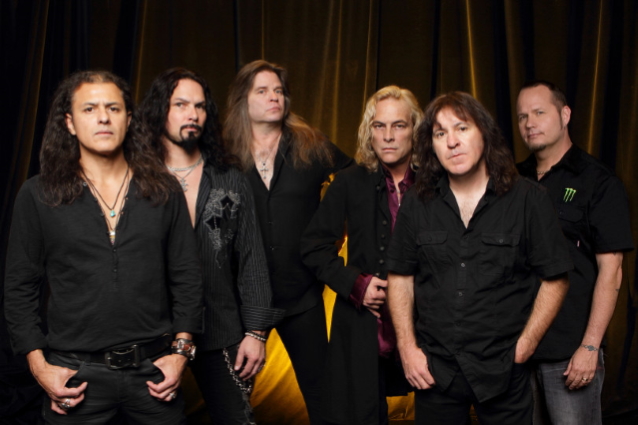 Drummer Simon Wright spoke to Canada's The Metal Voice about the status of the debut album from DIO DISCIPLES, which pays tribute to Ronnie James Dio and is fully supported by Dio's widow/manager Wendy.

DIO DISCIPLES is made up of former members of DIO, along with a rotating lineup of vocalists, including ex-JUDAS PRIEST singer Tim "Ripper" Owens and LYNCH MOB frontman Oni Logan.

Billed as a "celebration of the music and legacy of the greatest singer in the world, Ronnie James Dio," DIO DISCIPLES have been playing Ronnie's music on tour in a bid to keep their old bandmate's memory alive.

Asked by The Metal Voice if the DIO DISCIPLES LP has already been completed, Wright said (see video below): "The album's kind of on hold. We took a shift, and we were all really excited about it, which is the [Ronnie James Dio] hologram [tour]. We're all involved with the hologram [tour] at the moment, which is called 'Dio Returns'. We were out on the road May and June of last year, and it went really well. When we first started it, it was kind of slow, and people were very wary of it. In a way, you can't blame 'em, 'cause it's new technology and there are feelings, and they think that we're doing Ronnie a bad move, which is ridiculous. I mean, people have screens up that show images. It's pretty much the same thing — we're not trying to raise the dead. So, yeah, we took a shift from that. So DIO DISCIPLES is kind of on hold at the moment. But it's still there."

According to Simon, "about four or five demos" have been laid down so far of "different songs" that he and guitarist Craig Goldy had been working on. As for the material's musical direction, Wright said: "It's difficult to pin it down, because some of [the tracks] are a little different. Still a little bit of [the] DIO [sound], the way Ronnie would write, obviously, 'cause that's rubbed off on Craig, and I hear things too. But at the moment, it's a little bit eclectic. So that was gonna be one thing we were gonna approach. We need to consolidate it and make it into a DIO DISCIPLES sound. So that was a conversation we were having: 'We need to figure out where we're going with this.' At the moment, it's a bit all over the place. But they sound good. They're great ideas."

Several years ago, Goldy revealed DIO DISCIPLES were planning to start work on a project of original material, and they debuted three of the new songs during their May 2016 appearance at the "Ride For Ronnie" motorcycle rally and concert in Encino. Fan-filmed video footage of one of the tracks, which is apparently called "Till The End Of Time", can be seen below.

Craig previously told "Talking Metal" that he has been collaborating with fellow former DIO member Jeff Pilson on the material for the debut DIO DISCIPLES album.

Pilson is best known for playing bass with DOKKEN and FOREIGNER, but he also toured with DIO in the 1990s and performed on three of the group's albums — "Strange Highways" (1993),"Angry Machines" (1996) and the group's tenth and final studio release, "Master Of The Moon" (2004).

Owens told Canada's The Metal Voice about DIO DISCIPLES' forthcoming LP: "We're not making a DIO record. We couldn't do that. The best thing is, we've all done different types of records, but there's always some similarity to the classic metal and classic rock format, because we have this in us. But we still always move forward a little bit. But that's what it's gonna be. JUDAS PRIEST, DIO, AC/DC — all these influences are in us, and they're not gonna leave us. It's just us writing songs. It's not us writing songs to sound like something; it's us going in and writing songs."

Two years ago, Wendy said that DIO DISCIPLES' debut album would be released via BMG.