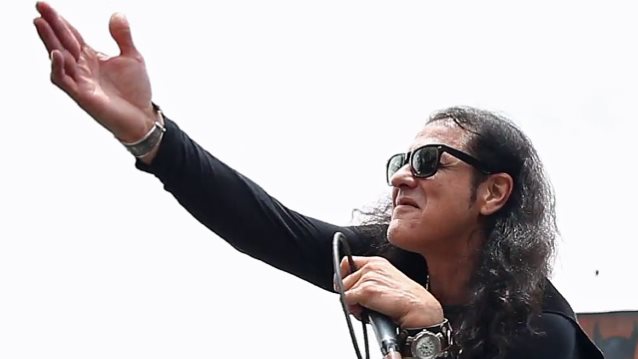 DIO DISCIPLES and LYNCH MOB singer Oni Logan sees nothing wrong with the hologram of Ronnie James Dio, which made its debut at last year's Wacken Open Air festival in Germany. Created by Eyellusion, the surprise appearance of the heavy metal icon during DIO DISCIPLES' set closed out the massive metal event which was attended by more than seventy-five thousand fans.

Eyellusion recently announced initial dates for "Dio Returns: The World Tour", featuring the Ronnie James Dio hologram reunited with the late rock star's former bandmates from the DIO band. The tour will make more than eighty stops around the globe, kicking off in Helsinki, Finland on November 30.

Asked by "The Classic Metal Show" what it's like to share the stage with the Dio hologram, Logan said (hear audio below): "Well, I've only done it once, I've only had the experience once, and that was at the Wacken festival in Germany. I was asked to do that, and, of course, out of labor of love for Ronnie, because I knew the man and he was a friend of mine — he was one of the first people I met when I came to L.A. when I was twenty-five — I feel it's a family thing. When they had asked me to do it, I said, 'Yes, I'll do it.' And, of course, the second singer is Tim 'Ripper' Owens [ex-JUDAS PRIEST, ICED EARTH]

"Initially, it started off with just performing the classics of Ronnie and going to Mexico and touring with NAZARETH and doing a tour here," he continued. "I didn't imagine that it would turn into a hologram that was presented to Wendy [Dio] and Niji management company. And it just seems that it's taken a natural course into the future as far as keeping Ronnie's legacy alive."

Logan added: "If you can remember back in the day, before [DIO's] show, [Ronnie] would appear in a crystal ball before the band would hit the stage. So he was all about magic, he was all about the idea of entertainment — meaning visual aspects. I mean, c'mon, fighting the dragon with a sword on stage. He was all about that — he loved entertainment. So I don't think it's a far reach to say that he wouldn't have approved. He was a proud man. He was an artist first and foremost, and he also was an entertainer. And I think this is just a way of keeping his legacy alive, his music alive for a younger generation to discover. And because we're friends and family, we try to do our best to keep his music alive.

"As far as me sharing the stage with a hologram, it doesn't necessarily bother me. As long as it's done right and it looks cool and everybody's having a good time and sharing the good time and the energy's good, I'm all for it."

Logan also addressed the criticism that has been addressed at the creators of the hologram by some of Ronnie's fans for "disrespecting" the legendary heavy metal singer's memory.

"Everybody's entitled to their opinion," Oni said. "For me, I just say, look, it's entertainment, it's keeping his music alive, so what's wrong with that? To me, that's how I feel about it — it's about keeping his music alive and about keeping him in the public's eye for other — like I said — generations to discover. I mean, the man was… his arms reached globally wide, and I don't think it should go away. I think his music should live on forever. I think it should go to the moon. I think it should last forever, because he was such a dynamic and a great artist. I mean, when I discovered RAINBOW, that was it for me. I ordered that album through Columbia House post, and I got that. They were my answer to LED ZEPPELIN when ZEPPELIN took a break for a while. I just thought the world of Ronnie James Dio. So, for me, it's all about keeping his name and legacy alive, his music alive. We're doing stuff from his past, from the RAINBOW albums — 'Gates Of Babylon', we're doing 'Stargazer', all that stuff that should never go away. If we didn't have this vehicle — Craig [Goldy] and Simon [Wright] and Scott Warren, the original band — plus trying to incorporate something futuristic to it and having Ronnie on stage to bring back some smiles and memories, it would all just wither away and we would never get anything back from that type of music. I mean, let's face it: who makes great music like that these days?"