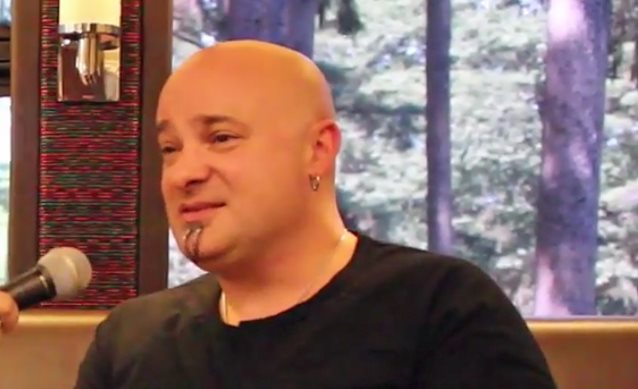 Tigman of the Q103 radio station conducted an interview with DISTURBED singer David Draiman before the band's July 12 concert at the Saratoga Performing Arts Center in Saratoga Springs, New York. You can now watch the chat below.

Asked how it feels to have a Top 40 radio hit — a first for DISTURBED — with its cover version of SIMON & GARFUNKEL's "The Sound Of Silence", Draiman said: "It feels great. Everyone and anyone is welcome to come on board. You know, music is meant to cross boundaries. I think that people are too… They've become genre snobs. Many people have eclectic tastes. Many people like to listen to all kinds of different music. I mean, I do; I'll listen to many different styles inside a day, a week, a month, a year. It doesn't matter. So why not? Sometimes it depends on what your mood is, what you're gonna end up wanting to hear. And I think that we're in some great company. There is some incredible talent at the format. So I'm very, very proud of it."

Draiman previously told The Wall Street Journal that he "couldn't be more flabbergasted" by the success of "The Sound Of Silence". He added: "[It's a song] that my parents can play for their friends with pride without having to warn them not to be frightened ahead of time. I have fans saying, 'Finally, me and my mom can actually agree on music for once!'"

DISTURBED's record label, Warner Bros., credited the song's popularity to the video for "Silence", which was released in December 2015. To date, the clip has been seen more than 77 million times, a record number of views on YouTube for the group.

DISTURBED's cover of "The Sound Of Silence" can be found on the quartet's latest album, "Immortalized", which became the band's fifth effort in a row to enter the chart at No. 1 — a feat shared only with METALLICA and DAVE MATTHEWS BAND.