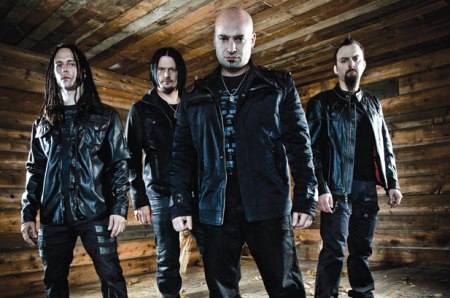 DISTURBED Drummer: 'The Music Is Always Cathartic For Us'

Kate Heath of myYearbook recently conducted an interview with DISTURBED drummer Mike Wengren. A couple of excerpts from the chat follow below.

myYearbook: It was only a little over a year ago that we caught up with you guys about your last album, "Indestructible". Not much time has passed, and here you are again with the release of your fifth studio album, "Asylum". There seems to be a lot of fire behind this record, would you agree with that?

Wengren: Once we get off the road and we have a little bit of time to decompress, it actually only takes Danny [Donegan, guitar] and I about a month before it's time to start writing. He always has a bunch of riffs in mind. When we're home, we miss touring. We miss working with the music, so it's a natural progression for us to just start writing.

myYearbook: Why did you decide to name this record "Asylum"?

Wengren: This is a good question. "Asylum" basically has a dual meaning. Most people assume when you talk about an asylum it's like an insane asylum. There are definitely some aspects of the music that would tie in with that. At the same time, asylum also has another meaning where it means a safe haven, a safe place. So it just seemed to really fit this body of work and what we stand behind.

myYearbook: This album finds the band in a much darker place, working through some very personal and heartbreaking moments in your lives as reflected in one of the songs "My Child". Do you feel that writing this album has helped the band heal some?

Wengren: The music is always cathartic for us. It's always a means of release and a means to heal. We always write from real-life experiences and I think that's why fans are able to connect with the music. We're not the only ones who go through those things. Everybody does in their daily lives to some capacity. They may hear a certain song that reflects on something that they've gone through in their lives as well.

myYearbook: Similarly to "Indestructible", you guys decided to self-produce this record. What kind of freedom does that offer you creatively?

Wengren: Well, there isn't anyone else in the room other than us who is adding his two cents to the music. At the same time, we don't think it's necessary at this point in our careers to say we would shut [a producer] down. We're open to whatever might happen in the future. There's no one that we trust better than each other. We've been together for so long, we know each other, we can anticipate each other's moves. We're the ones capable of getting the best performances out of each other.

Read the entire interview from myYearbook.