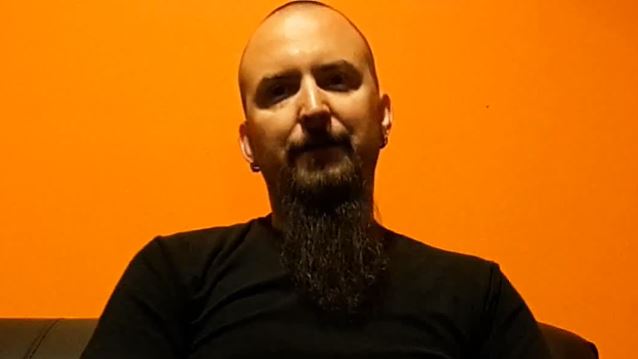 DISTURBED Drummer: 'We Don't Ever Have A Throwaway Song'

Germany's Whiskey-Soda.de recently conducted an interview with DISTURBED drummer Mike Wengren. You can now watch the chat below. A couple of excerpts follow (transcribed by BLABBERMOUTH.NET).

On his relationship with his DISTURBED bandmates:

Mike: "We are a family. We are brothers. We love each other. I'm closer with these guys than I am with just about anybody in the world. And they are my family, and we really get along, and we really enjoy being together. You know, we tour and we're on all these festivals where there's all these other bands, and often we will go to catering together as a band, and we'll go have lunch, and we'll go have dinner, and we'll be sitting at the same table, talking and hanging out. And we see other bands that the drummer is over here and the singer is over there, and there's nothing wrong with that, but we do actually like each other."

On DISTURBED's connection with its fans:

Mike: "Our fans, we have a special connection with our fans. There's a connection with the lyrics, the meaning behind the songs, the energy of the music. The fans, there's a real connection there, and I think that we're honest with them, and they know it, they sense it, and they can feel it too. So if we can't be honest, then it wouldn't work."

On the making of DISTURBED's comeback album, "Immortalized":

Mike: "I can't remember the total number of songs; it was, like, nineteen songs, I think, that were final recorded versions, and we did have to keep some off for B-sides. I'm not exactly sure of the strategy of when they'll ve released or where, but we do have a couple in our back pocket, so to speak. But as far as what goes on and what goes off, it's usually pretty obvious what songs are making the record. I think that, for us, we don't ever have a throwaway song. If there's a song that isn't working, it's pretty obvious to us that it's not working. And usually there may be a part — like a riff or a beat or a melody — for the 'throwaway' song that still is good enough to make it to another song, so the good stuff always seems to get recycled. If the song, for some reason, isn't working, but the riff is cool, maybe we'll just put in on the backburner and save it for later, and maybe when we're in a different headspace, we'll take that riff and try it in a different way."

On whether there are some things that he misses from DISTURBED's early days:

Mike: "Well, I guess… There's not a whole lot that I can say that… I don't wanna say that there's nothing that we necessarily miss, but I like to say that every experience we've ever had has shaped who we are as people and as musicians and as a band. And so whether it was good or bad, they are still experiences that have made us who we are today. So, sure, I like to reminisce about old times, but I wouldn't change a thing. I think that we're really fortunate for the amazing fans that we've been able to earn, and they've stood by us all these years, and we're just really fortunate for the career we have and we're just lucky. Life is great right now."

"Immortalized" became DISTURBED's fifth effort in a row to enter the chart at No. 1 — a feat shared only with METALLICA and DAVE MATTHEWS BAND.

DISTURBED version of SIMON & GARFUNKEL's "The Sound Of Silence" has been a huge hit for DISTURBED, with Paul Simon sharing his approval of it publicly after watching the band perform the song on "Conan" and also exchanging e-mails with singer David Draiman.

DISTURBED's record label, Warner Bros., credited the song's popularity to the video for "Silence", which was released in December 2015. To date, the clip has been seen more than 82 million times, a record number of views on YouTube for the group.