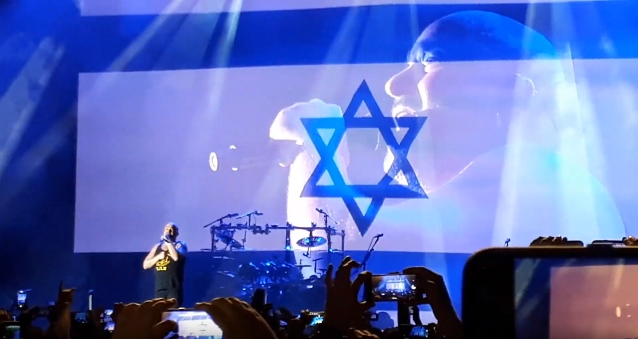 According to The Jerusalem Post, the 46-year-old singer, who is of Jewish heritage, spoke to the crowd in Hebrew throughout the show and, at one point, donned a t-shirt with an Israel Defense Forces (IDF) insignia and proclaimed, "This is for all the IDF soldiers." Israeli flags were also flashed on the screen throughout the performance.

Although David has visited the country many times, this was the first DISTURBED concert in the Jewish state.

The DISTURBED song "Never Again", from 2010's "Asylum" album, was written about the Holocaust and calls out people who deny it.

In recent months, Draiman has been speaking out against the Boycott, Divestment and Sanctions (BDS) campaign, which calls for economic pressure on Israel to end the occupation of Palestinian land, grant Arab citizens equal rights and recognize the right of return to Palestinian refugees.

Earlier in the week, Draiman spoke to KAN radio, where he called BDS advocates "idiots" and "Nazis in suits."