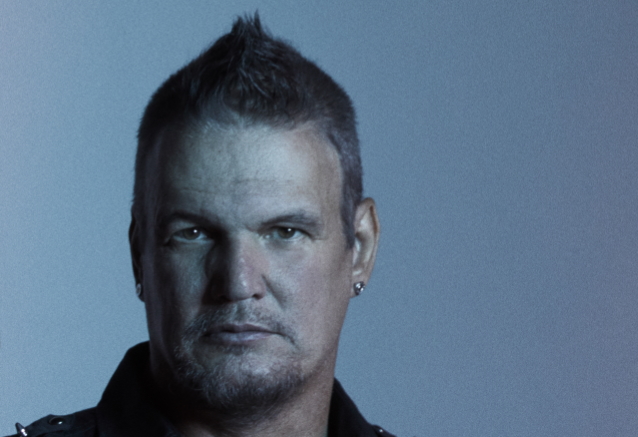 In a new interview with Wichita's T95 The Rock Station, DISTURBED guitarist Dan Donegan was asked if he and his bandmates might focus on releasing singles in the future as opposed to full-length albums, as has been the case for much of DISTURBED nearly three-decade career. He responded (as transcribed by BLABBERMOUTH.NET): "It's hard to give an answer to that. Back in the day, in our day, you [went] from albums to cassette tapes and cassette tapes to CDs and CDs to MP3s. I know that the hardcore fanbase loves to have the whole body of work.

"I can't really say [what we will go]," he continued. "I know that, yes, today's environment seems to just gravitate towards the singles and just [releasing] one [song] at a time. And for the artists themselves, it's frustrating to put your blood, sweat and tears, and all this time and effort and budgets into making a full album if seven songs don't see the light of day — if you only put out three singles and you have 10 songs on an album. So it's frustrating to think that you put all that work and effort and the same amount of energy into those other seven tracks that maybe a handful of the hardcore fans will love but the average listened may never get to. So, that's a tough call. It's really hard to say what the future's gonna hold for us on that. So, we'll see. I can't say one way or the other. But it seems like it's kind of headed in that direction for most."

DISTURBED singer David Draiman previously floated the idea of focusing on singles and EPs in a November 2021 interview with HardDrive Radio. At the time, he said: "We live in an environment right now and in an age where people's consumption of music has been very soundbitish and very track-driven and very single-driven. And there's definitely some beauty towards continuing to try and [make] things like concept records and telling a long story over the duration of a series of songs — there's huge merit to that — but I think that when you write 10 songs and three of them actually get worked at radio and maybe, if you're lucky, the fans are really familiar with half the record and the rest ends up sitting on a shelf, and if you do end up pulling it out one day, it's like an obscure, weird moment during the set, and it's almost like gratuitous for yourself. I don't wanna do that anymore. I wanna make everything count. I wanna make sure that we get the biggest bang for everything we're putting out there. I think that that should be easily attainable. It seems to be where the environment is going, and it seems to be — whether we like it or not — what the digital age has funneled us into."

DISTURBED's eighth studio album "Divisive", arrived on November 18 via Reprise. The LP was recorded earlier this year with producer Drew Fulk (MOTIONLESS IN WHITE, LIL PEEP, HIGHLY SUSPECT) in Nashville, Tennessee. The follow-up to 2018's "Evolution" includes the three recently released singles "Hey You", "Unstoppable" and "Divisive". Donegan's divorce inspired the "Divisive" song "Don't Tell Me", which is a duet with HEART's Ann Wilson. In two decades, it breaks ground as the first-ever guest collaboration on a DISTURBED record.