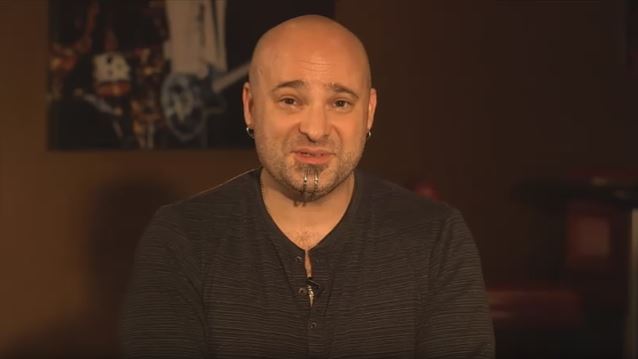 DISTURBED singer David Draiman was recently interviewed by the KBAD 94.5 FM radio station in Sioux Falls, South Dakota. You can now watch the chat below. A couple of excerpts follow (transcribed by BLABBERMOUTH.NET).

On the writing process for DISTURBED's comeback album, 2015's "Immortalized":

Draiman: "You know, once you have that rediscovery — and that's literally what this whole recording process and writing process was… We hadn't written together in the same room since the 'Believe' record cycle, so we're talking 2001, 2002. So it was quite a long time. And we became very dependent on technology and sending soundwave files back and forth to one another. So I reached out to Dan [Donegan, DISTURBED guitarist] very early on in the writing process, when he had only sent me three very skeletal pieces of music to start working with and improvising melodies and rhythms for the vocal. And I said to him, 'Listen, I'm killing myself here. I'm banging my head against the wall. I've gotta come out there. I need to use you guys as my barometer again. I need to vibe off of your reaction as I'm coming up with it.' So that's the way every single writing session went for the duration of the writing of 'Immortalized'. And we're never going back."

On how long DISTURBED can keep going:

Draiman: "Until we physically are no longer able to function. I look at THE ROLLING STONES and I still see them bring it every time they go out and play. Hell, even if they have to bring their own team of doctors and nurses with them, whatever they need to do, they make it happen, because… Look, when you're firing at all cylinders and the crowd's with you, there is absolutely no substitute for that feeling. None."

"Immortalized" debuted at the top of the Billboard 200 chart, making it DISTURBED's fifth effort in a row to enter the chart at Number One, a feat shared only with METALLICA and DAVE MATTHEWS BAND.