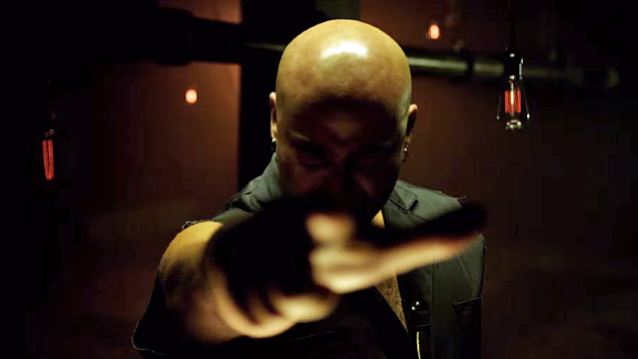 DISTURBED has launched a countdown clock online at the band's official web site that is scheduled to hit zero tomorrow (Tuesday, June 23) at 8:00 a.m. EDT (5:00 a.m. PDT). The group has dropped a couple of hints over the weekend that it is preparing to to end its four-year hiatus. First was the unveiling online of a new band logo, but far more telling was the arrival of three separate videos at the act's social media pages which seem to show the DISTURBED mascot, called "The Guy", seemingly emerging from a deep sleep.

Tomorrow's announcement is expected to include the unveiling of DISTURBED's first new music since 2010 as well as the initial details of the band's upcoming CD.

DISTURBED has been on hiatus since the fall of 2011, since completing the touring cycle for "Asylum" and issuing a rarities collection called "The Lost Children".

DISTURBED singer David Draiman launched a new band called DEVICE in 2013 and toured behind it for a few months, while scoring a No. 1 rock single with the song "Vilify".

Back on April 22, BLABBERMOUTH.NETexclusively reported the rumor that DISTURBED was recording its first album since 2010's "Asylum".

Although there has been no official confirmation on the matter, there are rumblings that the band has been working with producer Kevin Churko, who has helmed the latest efforts from a number of popular hard rock and heavy metal acts, including FIVE FINGER DEATH PUNCH, IN THIS MOMENT, PAPA ROACH and HELLYEAH.

If the rumor mill is correct, at least some of the recording sessions took place at Churko's The Hideout Recording Studio in Las Vegas.