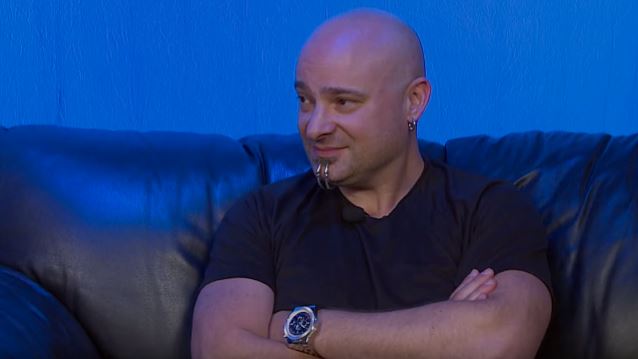 DISTURBED singer David Draiman says that hard rock and heavy metal is as vibrant as it's ever been and blames the debate over the attendance of the Rockstar Energy Drink Mayhem Festival on "somebody having too big of a mouth."

The 2015 Mayhem Festival generated controversy earlier in the summer after festival co-founder Kevin Lyman blamed the event's low ticket sales on the fact that metal has failed to produce new and younger headlining bands, adding that "metal got gray, bald and fat" and "chased girls away." SLAYER guitarist Kerry King responded by saying that the problem with this summer's event lay not so much with the metal bands themselves but with the way the festival was organized.

Asked by "HardDrive Radio" for his opinion on the Mayhem organizers' apparent decision to end the traveling event after eight years, Draiman said (see video below): "You know what? That situation is simply a symptom of somebody having too big of a mouth. And that's, unfortunately, Mr. Kevin Lyman, who went ahead and said a whole bunch of things which were not completely grounded in reality; I don't buy any of it. The back-and-forth and the unnecessary banter between the headlining band this year, and between him, that created a mire of garbage so deep, that, it's, like, how do you save from that situation? So I think they did the right thing. It's not that the demand has gone anywhere, but you tarnish people's impression of it… well, you know, the phoenix must rise from the ashes. And believe me, we're gonna be doing everything in our power to make sure that that does in fact happen."

He continued: "There's no doubt that hard rock and heavy metal is as vibrant as it's ever been. I could throw any number of indicators and statistics at you that you're probably already very well familiar with. So we don't need to prove it to anyone. But that, I'm sure, will end up resolving itself; I have every confidence."

This year's Rockstar Energy Drink Mayhem Festival kicked off on June 26 in Chula Vista, California and wrapped on August 2 in Dallas, Texas.

DISTURBED's first show in four years is scheduled for tonight at the House of Blues in the band's hometown of Chicago.