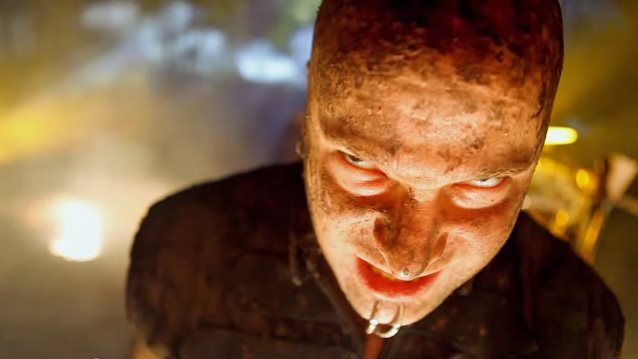 DISTURBED has dropped a couple of hints over the weekend that it is getting ready to end its four-year hiatus. First was the unveiling online of a new band logo, but far more telling was the arrival of a video at the act's social media pages which seems to show the DISTURBED mascot, called "The Guy", seemingly beginning to emerge from a deep sleep.

Back on April 22, BLABBERMOUTH.NETexclusively reported the rumor that DISTURBED was recording its first album since 2010's "Asylum".

Although there has been no official confirmation on the matter, there are rumblings that the band has been working with producer Kevin Churko, who has helmed the latest efforts from a number of popular hard rock and heavy metal acts, including FIVE FINGER DEATH PUNCH, IN THIS MOMENT, PAPA ROACH and HELLYEAH.

If the rumor mill is correct, at least some of the recording sessions took place at Churko's The Hideout Recording Studio in Las Vegas.

The members of DISTURBED have offered no updates about possible recording or touring activity since the band went on hiatus in late 2011.

DISTURBED singer David Draiman revealed a few months ago that he was co-writing and producing some "baby bands" — though he didn't divulge more details because of a non-disclosure agreement.

Back in January, Draiman gave fans a "non-update" on the status of DISTURBED via his Twitter account, writing: "OKAY… 1. Disturbed WILL REUNITE…SOMEDAY. 2. I HAVE NO IDEA WHEN 3. NO CLUE ON Device EITHER – OOH WA AH AH AH."

His tweet echoed comments made to The Pulse Of Radio back in 2013 about DISTURBED's eventual return. "DISTURBED will reunite when the time comes," he said at the time. "When we feel it's right, when [Draiman's side project] DEVICE has run its course, when everybody's in the right head space and we're feeling re-inspired and we're ready to go back at it and the itch is itching hard enough, it'll happen."