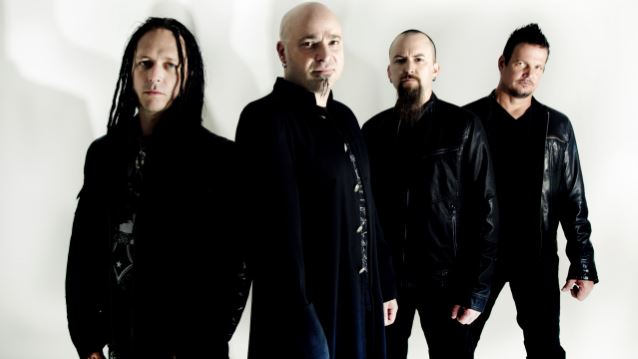 DISTURBED To Unveil First Details Of New Album Next Week

DISTURBED is teasing an announcement that will be delivered on Thursday, August 16 via the band's official social media channels. Although nothing has been confirmed, it is widely expected that DISTURBED will reveal the first details of its seventh studio album. The quartet recently launched an online poll to collect public opinion regarding the type of track that should be unveiled as the first taste of the group's new music. The two choices provided in the poll were: "Heavy" and "Ballad."

The band wrote online: "The new record is done! The new album includes many styles of music. Since our last album and the recent footage from the studio, we've seen a lot of discussion about the evolution of our new music. Disturbed Ones, we have decided to embrace the debate. For our next single — what kind of sound do you want it to be?"

Singer David Draiman told The Pulse Of Radio a while back that DISTURBED has always wanted to put melody in its music. "There's a huge contingency of kids that want stuff that they can just bash their head open to, you know, and that's great," he said. "We provide that as well. But to us, when we make our music, it has to be fused with melody. The aggression and the power needs to be harnessed with hooks that stay with you."

The new disc will follow up 2015's "Immortalized", which ended a four-year hiatus for the quartet and was its fifth album to enter the Billboard 200 chart at No. 1. "Immortalized" featured the band's massive hit cover of SIMON & GARFUNKEL's "The Sound Of Silence".

Like "Immortalized", DISTURBED's new album was recorded at The Hideout Recording Studio in Las Vegas, Nevada with producer Kevin Churko.