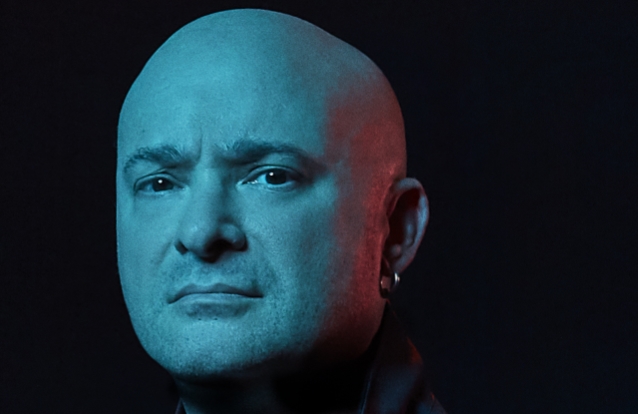 DISTURBED's DAVID DRAIMAN: 'People Are Addicted To Being Offended'

DISTURBED frontman David Draiman, who was well-known a few years ago for his outspoken views on politics and foreign affairs, was asked in a brand new interview with KLOS radio show "Whiplash" if he feels comfortable voicing his opinions in the current political climate. "No," he told host by Full Metal Jackie (hear audio below). "Look, the most surefire way for you to get into an argument is simply to voice an opinion. [Laughs] I had plenty of years of being very vocal about what I believe in. It's there — it's there for eternity. There's nothing I can do about it. There's nothing I really want to do about it. You learn from what you've done in the past. You learn from what you've said in the past."

The singer, who is promoting DISTURBED's latest album, "Evolution", continued: "It's funny. We did this article with Metal Hammer just recently. They were gracious enough to put me on the cover. And it ended up being an interesting piece for me, because they were showing me pieces of what I've been quoted as saying in the past. And yeah, certain things are always taken ever so slightly out of context or whatever. But you go back and you remember yourself saying those things at the time, even if they weren't exactly the way they were quoted, and I'm thinking to myself, 'Oh my God! What the hell were you doing? What were you saying?'"

He added: "If nothing else, I think, hopefully, social media has taught everybody to just watch what they put online, 'cause it'll come back to haunt you. But in today's environment, and there's so much on this record that actually speaks about it, people are addicted to being offended — they are addicted to it. They are lusting for the next little tidbit of information that's gonna give them an excuse to lose it and to wage social war… It's social media war, but to them, it's war, I believe. There's no point. I love to be able to say that I have chosen to just not participate [in] it.

"That's why something like the Supreme Court was created. That's why it was meant to be balanced by conservative justices and liberal justices having a cohesive, respectful, intelligent argument about both sides of the law."

Draiman recently said that he is "never returning to Twitter," three years after deleting his account on the social media platform.

This past August, the singer admitted to SiriusXM Octane that while he does not have an official presence on Twitter, he still uses the platform "as a news tool. I still have a 'shadow' Twitter account," he explained. "But I don't tweet, I don't spew anything. It's just there for me to be able to get my news."