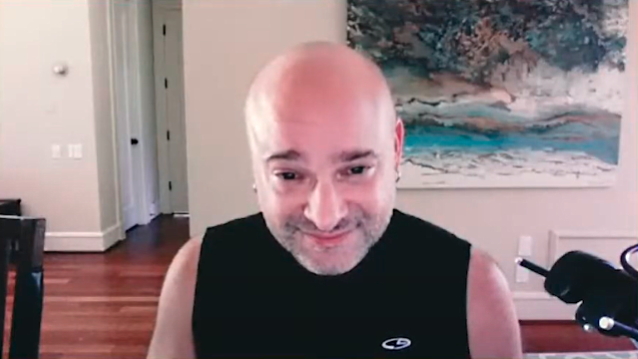 DISTURBED's DAVID DRAIMAN: 'People Are Gonna Come Out In Droves' To See Live Concerts Once Pandemic Has Subsided

On Friday (August 14),DISTURBED singer David Draiman took part in a live interview with "Offstage With DWP", the new online content series from Danny Wimmer Presents, one of the largest independent promoters in the United States. You can now watch the chat below.

Speaking about DISTURBED's plans to return to the road post-pandemic, Draiman said: "We can't wait to get back out there. Look, this is a necessary evil, everyone. Everybody needs to stay safe. Everybody needs to just take care of themselves, and we need to do what we need to do as a society and as a planet to just minimize the damage from this thing. And if that means that we need to wait to get together and celebrate, then that's what it means. And we'll be there, and it'll happen eventually. And we look forward to it happening. And I think all this built-up anticipation, and once it finally can happen, is gonna make for one hell of a celebration… Once it's safe, and [the fans] really can [attend shows again], and they've been pent up and held back for so long, oh my God — people are gonna come out in droves. I'm confident of it."

This past June, DISTURBED confirmed the rescheduled 2021 dates for its "The Sickness 20th Anniversary Tour", co-produced by Frank Productions and Live Nation. The amphitheater tour, with very special guest STAIND and BAD WOLVES, will begin on July 7, 2021 at iTHINK Financial Amphitheatre and all previously purchased tickets will be honored for their rescheduled dates. "The Sickness 20th Anniversary Tour" celebrates the two-decade anniversary of the band's seminal album "The Sickness". On this tour, the band will perform songs off the album, as well as tracks from their most recent studio release, "Evolution", and their extensive catalog.

Earlier in the year, Draiman confirmed that DISTURBED won't perform "The Sickness" in its entirety on "The Sickness 20th Anniversary Tour". "No, we won't do the entire album, but we're going to do a ton of 'Sickness' material, deeper cuts, stuff people haven't heard us play off the record for a while, and definitely a huge portion of material will be 'Sickness'-oriented," the singer told Billboard.com.