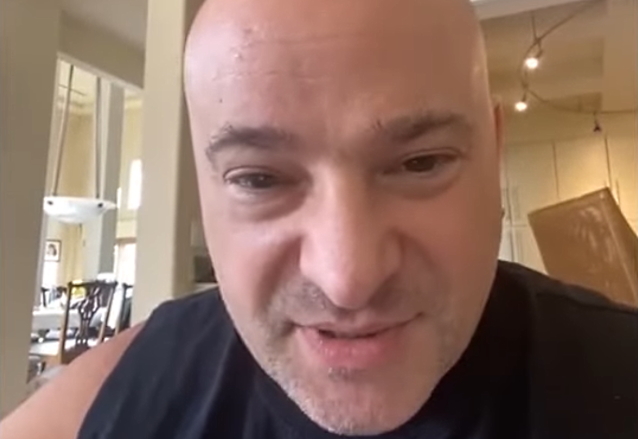 DISTURBED frontman David Draiman spoke to "That Jamieson Show" over the summer about how he has been dealing with the coronavirus crisis. In the interview, which has just been uploaded to YouTube, the singer offered his prediction on what the concert industry will look like post-pandemic, saying: "I'm confident as hell that once there is a vaccine of some sort that people will come out in droves; I think people are starving for live experiences and gatherings like never before. But here's the harsh reality of it: my wife and I, we have friends of ours that they lost their entire family in a week — seven people; all died. And if you go ahead and you buy in to the whole 'it has something to do with genetics and blood type,' well, then it makes a whole lot of sense. This poor girl lost all seven members of her family in a week — they all dropped dead from the virus. Not complications from the virus — from the virus. So it's a very real thing."

Draiman, who resides in Hawaii with his wife and their son, also touched upon how protests against police violence and racial injustice, as well as other mass demonstrations, could play a role in the spread of the virus.

"Whether it's protesting peacefully, or real protesting, or whether it's gathering for a rally or any other reason, these public gatherings, if they're not dealt with in the right way — and even if they are dealt with in the right way — you get a whole bunch of people together, socially distanced from one another, screaming their lungs out, maskless or not, enough of that particular matter is gonna get in the air and you're gonna fucking catch something; it's gonna happen," he said.

"If everything the scientists are telling us is true, people just need to calm the fuck down on every level when it comes to this right now. Just chill — chill the protests, chill the gatherings. Until we figure out how to really best deal with this thing, and until people that we love stop dying for unnecessary reasons, there's no other way around it."

Draiman went on to imply that he understands why some people hold the view that any cure involving a loss of economic momentum is worse than the disease itself.

"There's a very delicate balance between how much do you accept of death from the disease before it ends up becoming death from depression and suicides and loss of revenue and loss of businesses and all the things that go along with the other side of this," he said. "It's like the perfect storm of shit. There's no good answer to any of this. That's the saddest part."

This past June, Draiman told Download Festival TV that he has spent some of his downtime during the coronavirus pandemic "having conversations with the other guys in DISTURBED about getting some new material going, and we've got some stuff in its infancy. One song, definitely, that's killer in our back pocket; we just haven't tracked it," he said. "And we've got a few more song ideas, [but] nothing that's been hashed out enough."

Draiman went on to say that making music over the Internet has presented its own set of problems, especially since most of DISTURBED's last couple of albums were composed with the core members in a room together bouncing ideas off each other.

"We kind of need to get back into the rhythm of being able to do stuff like this in Zoom format or online as opposed to in person," he said. "At least it's some kind of real-time connection so that you can be creating together improvisationally to an extent, but there's still issues with audio — it's not as clear as you want it sometimes, there's too much compression and you lose level; it's a challenge — and the vibe isn't there. There's nothing that replaces you being in front of your co-songwriter and being able to feed off each other's energy and create in person."

In September, DISTURBED released a cover version of Sting's 1993 single "If I Ever Lose My Faith In You".

Back in May, DISTURBED's "The Sickness 20th Anniversary Tour" was postponed until summer 2021 due to the COVID-19 crisis.