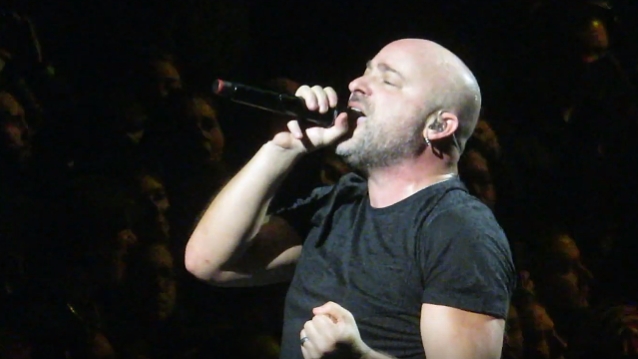 DISTURBED singer David Draiman spoke to Mistress Carrie of the WAAF radio station about how he keeps his voice in shape while performing a two-hour set with his bandmates on their current "Evolution" U.S. tour.

"It's a constant tightrope that any singer who still actually sings live has to walk," he admitted (hear audio below). "And it's not perfect on any given night, but I find that it's more important to be human than for there to be some sort of backing track of some kind. I think that the slight differences, the nuances, the little elements of imperfection show emotion, they show variety, they show reality. It makes it a more tangible experience — the way it's meant to be.

"I started out last run very, very compromised," he continued. "I was just coming off of pneumonia. It took me the entire run to finally get better. I had two weeks at home. I started out this run super, super strong. The type of material that we play on a nightly basis is challenging for anyone, and especially for yours truly. So it's just a constant work in progress.

"I've been working really, really strongly and consistently with my vocal coach, Melissa Cross, this entire time," Draiman added. "She's been a tremendous asset and help. And having the understanding of the other bandmembers and actually giving me a little bit of space during the set while enabling Mike [Wengren, drums] and John [Moyer, bass] and Dan [Donegan, guitar] to each have their own moments to shine during the set and do their own respective solos. Not only do I, on a selfish level, get into their respective solos, 'cause I like the parts musically and I enjoy it, but it gives me time to catch my breath and go through a little bit of a warm-up/cool-down type of thing to realign the cords. And so we've been able to find a really nice balance. But I'd be lying to you if I said that it wasn't still a tremendous challenge."

DISTURBED is currently on tour in support of its latest album, "Evolution". The trek next stops in Montreal, Quebec, Canada on Friday (March 1).

"Evolution", DISTURBED's seventh studio LP, came out last October and contains the rock radio singles "Are You Ready" and "A Reason To Fight".