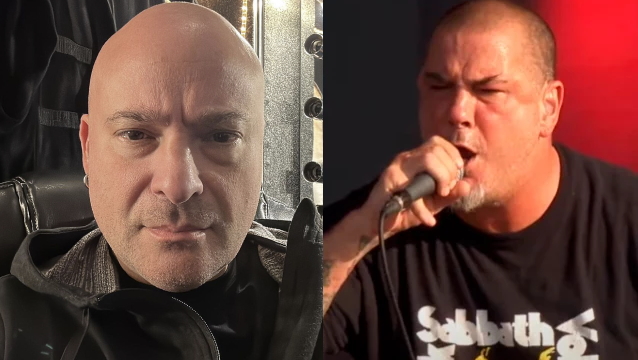 DISTURBED's DAVID DRAIMAN Says PANTERA Reunion Will Be 'Devastating': 'I'm Excited About It'

Draiman discussed his views on PANTERA's comeback in a new interview with Andy Hall of the Des Moines, Iowa radio station Lazer 103.3. He said (as transcribed by BLABBERMOUTH.NET): "Look, I can't think of two guys who were closer to the original members than those two guys — as friends, as colleagues, as brothers. It's just appropriate. If you're gonna have anybody, it should be those two — it should be Charlie; it should be Zakk.

"No one will ever be able to replace the Abbots — they're irreplaceable — but the music that they created together is so epic and so great, and the new generation, an entire new generation of fans, deserves to experience it live. And I truly feel very confident about that lineup. I think it's gonna be devastating. I selfishly want to go see it. So, yeah, I'm excited about it."

David previously touched upon PANTERA's return earlier in the month in an interview with Germany's Rock Antenne. At the time, he said: "Oh, I can't wait. I'm gonna go see it. I mean, look, there's an entire generation of fans of the music that never got the chance to see it played live. They deserve the opportunity. And I couldn't think of any two guys who are more appropriate and skilled to fill the shoes of the brothers than Charlie and Zakk. I think that was the respectful and smart way to go. Charlie was very, very close to Vinnie, very close to the PANTERA camp. And Zakk, basically, it used to be Zakk and the PANTERA guys in the dressing room backstage at Ozzfest that we'd always be hanging with all the time anyway. He was one of the closest guys to them as well."

Draiman added: "It's never going to be the same as Vinnie and Dime. That's something we've lost forever, and we have to recognize that. But I think that this will be a great way to tribute all that they've accomplished."

This past February, David discussed PANTERA's influence on DISTURBED in an interview with HardDrive Radio to celebrate the 30th anniversary of PANTERA's classic sophomore major label album "Vulgar Display Of Power". Speaking about the impact the LP had on his musical upbringing, Draiman said: "[PANTERA] really, I think, at that point, had honed the whole groove metal thing that they had pioneered; they had gotten it to be so, so perfect. And look, that record was songs we covered, songs we adored, songs that were the soundtrack to many a late-night bit of Sodom and Gomorrah on the bus [laughs] — all kinds of craziness. There was all kinds of moments that those songs are literally part of the soundtrack to our upbringing.

"A lot of people don't really know this, but I don't think that there would be a DISTURBED without PANTERA," he continued. "I mean, the band that was DISTURBED before me that used to be called BRAWL had a singer by the name of Erich [Awalt], and he was very much in the Phil Anselmo school. [Editor's note: A four-song demo from BRAWL can be heard below.] All the stuff that I heard when I went to audition for the DISTURBED guys originally was much, much closer to old-school PANTERA than it was modern-day DISTURBED. And I was not sure I could even complement it properly at the time; I didn't know if my voice could be as ferocious as the music seemed to call for.

"I told Phil this when I saw him — I think the last time I saw Phil was actually in Texas; he was opening up for DANZIG with SUPERJOINT, I think, at the time," Draiman added. "And I told him that. I'm, like, 'Look, dude. You know it, I know it — I learned so much from you over the course of years.' He looks at me and goes, 'I know.' [Laughs]"

Back in July 2018, DISTURBED paid tribute to late PANTERA drummer Vinnie Paul Abbott by performing a cover version of the PANTERA classic "Walk" at that year's Rock Fest in Cadott, Wisconsin. Prior to launching into the song, Draiman told the crowd: "Our very first Ozzfest, PANTERA was on the main stage. And every night — every night — somehow, I ended up finding my way backstage to the PANTERA dressing room; in fact, I think most of the band did. And they were always so welcoming — they had the warmest heart, and Vinnie especially. Don't get me wrong, I will always love Dime [late PANTERA guitarist 'Dimebag' Darrell Abbott], and everyone will always love Dime — he is one of the greatest legends to ever grace the face of the planet. But personally, I don't feel enough has been said about the incredible heart, the majesty and the unbelievable level of musicianship that just came from Vinnie Paul.

"It's funny, because as I was hanging out with them, Dime wasn't really into our stuff," Draiman continued. "He was all telling Vinnie, 'I'm not into all that jumping-up-and-down shit.' Well, we're all about the jumping-up-and-down shit here. And Vinnie said, 'No, no, no, Dime, I'm telling you, you've gotta give these guys a chance. You've gotta give them a listen to.' And by the time our second Ozzfest came around, we were lucky enough to open up the second stage in our hometown of Chicago. And Vinnie and Dime made it out to the show just to come see us. They weren't playing, PANTERA wasn't on the bill — they came to see us. And an area that could probably accommodate maybe 10 thousand people at most at that side stage was swarmed with 25 thousand people that day. And I'll never forget, after the whole experience went down, which was met with a mixture of both shock and wonder, and some regret, because it wasn't the safest situation. But Vinnie and Dime were both blown away, and Vinnie became such a dear friend and such a huge supporter. And I miss him so very, very much, and I know you guys do too."

Next year, PANTERA will appear at Germany's Rock Am Ring and Rock Im Park, two simultaneous rock festivals, which will take place June 2-4 in Nürburgring and Nürnberg, respectively. They will also perform at Sweden's Sweden Rock Festival and Norway's Tons Of Rock festival that same month.