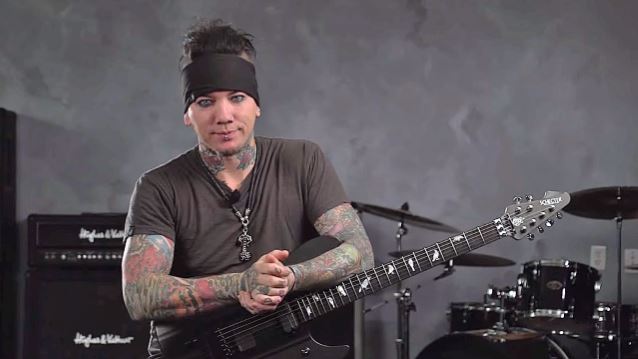 Former GUNS N' ROSES and current SIXX: A.M. guitarist DJ Ashba says that he "had a lot of artistic freedom to do things" with GN'R offstage during his six-year stint with the band.

Ashba, who joined GUNS N' ROSES in March 2009 following the departure of Robin Finck, told Ellen of the "Moshpit" show, which airs on the SYN 90.7 radio station in Melbourne, Australia (hear audio below): "Well, I learned a lot [from my time with GUNS N' ROSES] onstage and offstage. I learned a lot about the business side of things and just how on a very, very large scale a band operates. It's much different when you're touring with a band in a machine like GUNS N' ROSES than touring in a small, little band like BEAUTIFUL CREATURES. So you learn a lot. And I'm a sponge. You learn about budgets and all kinds of stuff, and you apply that to your own thing. So you can't buy the experience that I experienced playing stadiums every night. And although it was not my music — it was somebody else's music — the experience was just… it's so valuable. I learned a lot and now I can apply it, on and offstage, in SIXX:A.M."

According to Ashba, his company Ashba Media — which designed the box offices for Cirque Du Soleil's "Zarkana", "Zumanity", "The Beatles Love" and "Criss Angel: Believe" — was involved in creating some of the merchandise items that were sold on the GN'R tour. "We designed Axl's [Rose] piano and we designed some stage stuff, and it was cool," he said. "We designed some t-shirts and lot of the posters and flyers for different things. So, I mean, it was fun. I had a lot of fun, both because I was in there playing guitar, but also I had a lot of artistic freedom to do things and help in different ways offstage, which was kind of fun for me."

Ashba recently claimed that he was approached about being part of GN'R's "Not In This Lifetime" tour, but that he declined, citing his desire to pursue SIXX:A.M. full time.