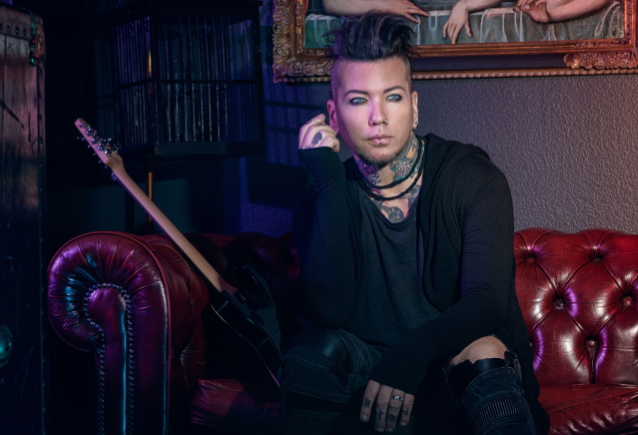 Only singer Axl Rose, guitarist Slash and bassist Duff McKagan from GN'R's "Appetite For Destruction"-era lineup are taking part in the band's current reunion. They are being joined by keyboardist Dizzy Reed, guitarist Richard Fortus and drummer Frank Ferrer. Also appearing with them is second keyboardist Melissa Reese.

Three years ago, Ashba told "Vegas Junkeez" about his stint with GUNS N' ROSES: "SIXX:A.M. [had] a No. 1, biggest song of the year on the radio, but it didn't come close to comparing, or preparing me for the magnitude that was ahead of me. I had no idea. I had no idea about a lot of things. I didn't understand taking the gig, there'd be certain… 'Cause I went into it probably pretty naïve. Slash is one of my guitar inspirations, so, to me, it was just so inspiring and such a cool thing. But I didn't really think about, 'Oh my God. There are hardcore GN'R fans, and you've gotta win these guys over.' Once you do, you win 'em for life and they're the best fans you could ever possibly have… But I didn't realize there was gonna be a big handful of people that, no matter how good you do at the gig, they were gonna fucking hate you, because you're not [one of the members of the classic lineup]… And I get that now — standing back, I totally get it and I respect it. But it's almost like they immediately pitted me against Slash, and I was just, like, 'I'm a fan too. I'm one of you.' So it was weird for me to get used to that. It was just one of those things where I just wanted to do whatever I could to do the gig justice — try to bring back, or carry on that reckless rock and roll attitude that I loved about the band."

Asked about his 2015 announcement that he was leaving GUNS N' ROSES, Ashba said: "It's one of those things where I knew Slash was coming back, which, as a fan… You've gotta understand — I'm a fan; I'm incredibly excited. Number one, I played a lot of the Slash parts, so I didn't have the brain capacity to relearn three and a half hours' worth of music differently. But more than that, if he's coming back, this is his gig. I gladly stepped… I was, like, 'Hey…' And it was the best of both worlds, because I get my favorite band back and I get to go play in a band called SIXX:A.M. that I helped create, so it was just a win-win for me. And I'll always cherish the times I had. But, yeah, I gladly stepped back."

Happy freaking birthday to this rock star D.j. Ashba!! This dude knows how to throw a party..Cheers to an amazing night that I know, None of us will Ever forget!!🥂🤘🎶
🦑🦑🦑

Jason Krychek , Tara Morgan , Grace Lafleur , DJ Ashba(B-Day boy),Andrew Stanton , and me after working the most insane birthday party ever !!!
More pics to come after some severe editing.
#VegasWeirdos