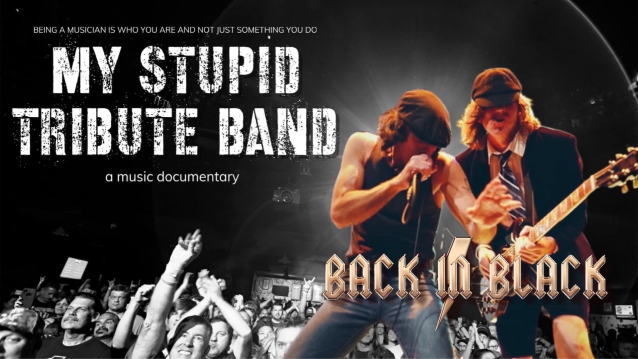 "My Stupid Tribute Band", the music documentary from the Dallas, Texas-based AC/DC tribute band BACK IN BLACK, was selected by the Dances With Films festival and will have its West Coast premiere on June 15 at 9:15 p.m. at the legendary TCL Chinese Theatre in Hollywood. Prior to the screening, the band will perform a free concert at the Ovation Complex at 8 p.m. on Hollywood Blvd.

"My Stupid Tribute Band" follows the 20-year history of BACK IN BLACK and culminates with its lead singer's audition for AC/DC in 2016, back when Brian Johnson's hearing loss forced him to leave the "Rock Or Bust" tour. It is a heartwarming and fun account celebrating the lows and highs encountered throughout their career.

"My Stupid Tribute Band" writer/director Michael Mroz said: "It is such an honor to be selected by this prestigious festival. I can't believe we are premiering our film at the Chinese Theatre, that's the same theater that premiered 'Star Wars'."

For tickets to the screening, go to this location.

BACK IN BLACK frontman Darren Caperna was one of several people who were selected by AC/DC to audition for the job of the lead singer in the legendary hard rock outfit. The audition took place the week of March 14, 2016 at a private rehearsal studio in Atlanta. Caperna was contacted by AC/DC via phone and was immediately flown out by the Australian rockers. Joining him on the trip was founding BACK IN BLACK member and guitarist Mike Mroz.

The audition began with a soundcheck, whereby the AC/DC tech crew performed a couple of songs with Caperna, to set levels and to help him feel more comfortable. Then, after a short break, AC/DC came in the room and greeted both Caperna and Mroz. "After the soundcheck, Darren and I were talking to the guitar techs, and all of a sudden I look over my shoulder and Angus Young was standing behind me waiting to say hi," said Mroz.

After meeting the band, and having some tea, AC/DC put Caperna to work. What was supposed to be three- or four-song audition turned into a 21-song concert. Caperna ended up singing the entire "Rock Or Bust" tour set, plus two additional songs that AC/DC guitarist Angus Young wanted to play, "Dog Eat Dog" and "Riff Raff". Caperna commented: "Before we started 'Riff Raff', Angus came up to me, and said, 'I'm warning you in advance that we are still a little rusty on this song!' Did I just hear Angus apologizing to me?!"

Mroz and Caperna spent over four hours with their musical heroes. Caperna stated: "It was all so surreal. We had a couple of breaks, and Angus told me some great Bon Scott stories. They were all so friendly, and treated us as their peers. I still can't believe that I sang with AC/DC!"

Caperna added: "Even though I did not get the job, it was the experience of a lifetime! Being in a tribute band for ]20] years, we were hoping that we would be able to meet AC/DC one day — but this goes way beyond our expectations! Now, I have a great story to tell my grandchildren, and the guitar students that I teach at For Those About To Rock School in Southlake, Texas."

Mraz said: "This experience was so inspiring and educational. Plus, I had my own private AC/DC concert, fronted by my singer. At the end of the night, I saw Angus outside, and he told me that Darren had done a great job. I thanked him again for the opportunity. I told him that when I first started our tribute band (BACK IN BLACK),I was a little uncomfortable wearing his trademark schoolboy outfit. But then I realized that it drove the girls crazy! Angus laughed and replied: 'Don't tell anyone our secret!'"

Formed in 2001, BACK IN BLACK continues to bring its incredible high energy concert reproduction to audiences across the nation and is already on schedule to play over one hundred shows this year.

For more information on BACK IN BLACK, visit backinblack.info.