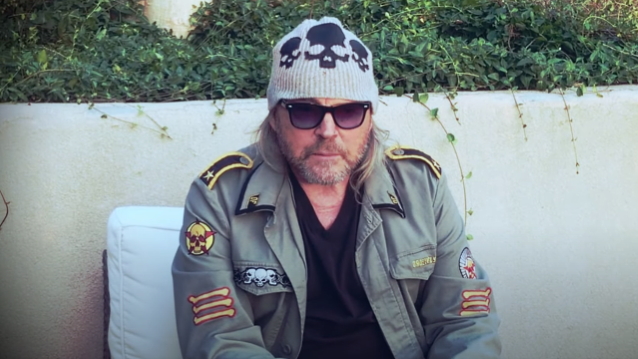 DOKKEN frontman Don Dokken has pushed back against criticism of his band's live performances, saying that people "don't know" what he went through during his various health battles.

In recent years, Don has been ruthlessly lambasted by fans after radiation treatments from a bout with stomach cancer and eventual vocal-cord surgery hurt his singing ability. The negative reviews were seemingly amplified after he underwent neck and spine surgery last November, leaving him unable to play guitar.

Asked in a new interview with SiriusXM's "Trunk Nation With Eddie Trunk" how he responds to the criticism from fans about his live performances, Don said: "I think they can kiss my ass. I see the criticism.

"It wasn't just my arm and my hand [that were affected by the surgery] — it was a lot of things. When I came out of surgery, I couldn't walk; I was in a walker, I was in a wheelchair. I had nothing. I couldn't even walk more than 10 feet without sitting down. So when I [performed at the Metal Hall Of Fame in Anaheim, California in January], I remember saying, 'I'm not sure I can stand here for five minutes to sing this song. I probably won't make it.' But I did. And then I went out, about two months later, as a test, and we did that LYNCH MOB / LITA FORD / DOKKEN show, and I made it through the first two shows, and then the third show, I had to sit on a chair; I just couldn't stand. My legs were giving out.

"When they severed all the muscles and cut all the nerves — I'm not a doctor — apparently they severed muscles to my hips, muscles to my back, my legs, everything," he explained. "They just butchered me. So it's been a hard struggle.

"I hike every day with my dogs. When I go on my deer trails on my property and I walk, it's not easy and it's painful, but I just keep walking and walking and hiking and trying to build up my leg muscles. And then people say, 'Yeah, I saw Don live, man. He was terrible. He was just standing there. He didn't look too good.' I'm, like, they don't know what I went through. It's a miracle I was even able to pull off three shows in a row with LYNCH MOB. We did three days with no day off. I pulled it off. Was I at the top of my game? No. Was I singing my best? No. That's another issue.

"When they went through my back into my neck, apparently they damaged one of my vocal cords," he continued. "That's why today I sound a little husky — my voice is a little husky now. So they did something to my vocal cords too. I'm just seeing every doctor on the planet trying to get better.

"As far as the fans go, I read a long time ago, for every hundred fans that wanna say the band wasn't good, the other three thousand people are happy. And that's all that matters, man. The people singing along with DOKKEN and singing the choruses, fists in the air, singing 'Into The Fire' and 'It's Not Love', that's the important thing.

"There'll be a guy on the Internet that works at Subway making tuna sandwiches, and that's the guy that gets on the Internet… This one guy cracked me up. He said, 'I saw DOKKEN eight times last year. They sucked every time.' I'm, like, then why in the hell did you come to the show eight times? You came to see us eight times, you really hated us. Well, stop coming to the show."

Don and his bandmates are currently working on DOKKEN's new album — the group's first since 2012's "Broken Bones". The LP will be released via Silver Lining Music, the label owned by Thomas Jensen, one of the founders of Germany's Wacken Open Air festival.