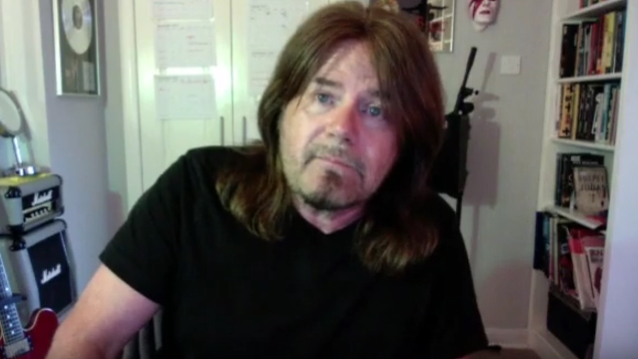 DOOGIE WHITE Looks Back On His IRON MAIDEN Audition, Says BLAZE BAYLEY 'Did A Great Job'

Doogie White, the Scottish rock singer best known for stints with RAINBOW, Yngwie Malmsteen and Michael Schenker, recalled his audition to replace Bruce Dickinson in IRON MAIDEN in 1993. Speaking to Rocking With Jam Man, he said (as transcribed by BLABBERMOUTH.NET): "I was recording in Brussels in Belgium, I was doing an album, and a friend of mine phoned me up and said Bruce was gonna be leaving IRON MAIDEN at the end of the tour and I should really send a tape in to Sanctuary [MAIDEN's management company]. So when I got home from doing the album, I put together four or five songs and sent them out. And I got contacted and told I would be singing with IRON MAIDEN on the Monday. And I got a cassette with, I think, 20 songs or something, and I had to learn them over the weekend. I was younger then; I could remember things. I sang with them on the Monday."

He continued: "It was up at Steve Harris's house. The studio was in an old farm house, an old building. And they stood around me in a circle. So I had Janick [Gers] and Davey [Murray] and Steve, and they put Nicko [McBrain] behind me, so at least the drums were coming from behind. And we just went through the songs. And we had a cup of tea [and some] bisuits. And then we went back and did some more songs. And then they asked me back again. But they gave the gig to Blaze. And Blaze did a great job. And then the planets realigned and the universe was saved and IRON MAIDEN became the greatest metal band on the planet."

In a 2005 interview with Metal Rules, White said that he sang a total of 22 songs with IRON MAIDEN, including "Be Quick Or Be Dead", "From Here To Eternity", "Can I Play With Madness", "Iron Maiden" and "The Clairvoyant". He also said that if he had gotten the job with MAIDEN, he never would have landed the gig with RAINBOW.

White came to the attention of the worldwide audience when Ritchie Blackmore asked him to be the lead singer in his reformed RAINBOW. They recorded one album together, "Stranger in Us All". Doogie would go on to sing with Swedish neo-classical guitarist Yngwie Malmsteen for over a six-and-a-half-year period, record two albums and tour the world. He also recorded four albums and toured with CORNERSTONE and has sung with TANK, MICHAEL SCHENKER FEST and ALCATRAZZ.