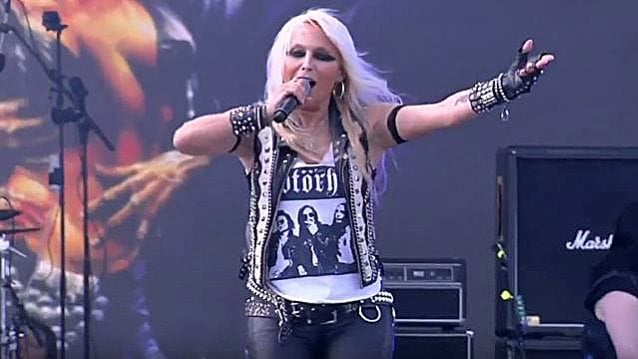 Asked why now was the right time to go out and play the "Triumph And Agony" songs again, Doro said prior to an appearance at last week's Sweden Rock Festival (see video below): "Well, because we have our thirtieth anniversary of this big record. It was called 'Triumph And Agony', and it was the biggest record. I think it was one of the best records. And I thought, 'Man, we have to play one time the whole album in its entirety,' and we never did before. And then I called my old guitar player, Tommy Bolan, and he played on the whole record, he played all the solos. And I asked him if he was into that idea, doing a couple of shows with just the 'Triumph And Agony' album and then some encores. And he said, 'Oh, let's do it. I'm ready.' And then we were rehearsing all, yeah, the last week, and I think it sounds really good. We are playing some songs we've never played before, but I think they will sound really amazing. And I'm very excited."

Doro was asked during the same interview if she was comfortable with her status as a pioneer for women in heavy metal music. She responded: "I just always try to give it my all, and I'm so glad when people like it, when people can get some positive energy out of it. I never thought about being special or that it's different for a woman to do it. I just my thing, and it's always from the heart, from the gut. And I always wanted to become a metal singer, so it all feels natural to me. I don't put on an act or something, but when people love it… ahhh… that's, like… And the fans, to me, that's the most important thing in my life — it always was, it always will be — and so when they like it, that means the world to me."

Doro will celebrate the thirtieth anniversary of "Triumph And Agony" on a short U.S. tour in September.