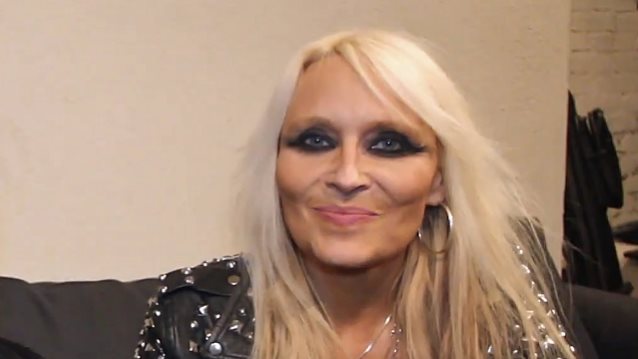 The Jimmy Cabbs 5150 Interview Series conducted an interview with German metal queen Doro Pesch prior to her September 16 concert at the Whisky A Go Go in West Hollywood, California, where she was celebrating the thirtieth anniversary of WARLOCK's "Triumph And Agony" album by performing the LP in its entirety. You can watch the entire chat below. A few excerpts follow (transcribed by BLABBERMOUTH.NET).

On how she's been able to retain both her energy and credibility for more than three decades:

Doro: "It was easy because the people that I care most about is our fanbase. The fans, they are everything to me. They are my main motivation, inspiration. I love them so much. I love them every year more. When I started out, I started in 1980, I had my first band, we were just playing and having fun, but then, in 1983/84, [WARLOCK's] first album came out, 'Burning The Witches', then we felt people really take it seriously. When we were playing live, you can tell people felt it was giving them so much energy. Every year I'm still learning, but the fans, that's why I get out of bed every day and try to make the best I can and always give it one-hundred eighty percent, especially live, that's what I love the most."

Doro: "We've remained friends for all of these years. We got along great and then I called him up last year and I said 'Hey, Tommy, 'Triumph And Agony' is almost thirty years [old]. Are you into doing some special shows?' And by the way, we want to do more in the States. These five shows are just the beginning. I wasn't sure if people would be interested. You never know. But now, I definitely want to do more gigs. I called him up: 'Thirty years of 'Triumph And Agony'. Are you into it?' He said 'Absolutely!' We started rehearsals and all these songs we never, ever, played. They were so nice. They had so much power and they outshined even some other songs we always have even in our setlist, so we played the whole 'Triumph And Agony' from top to bottom and all the favorite WARLOCK songs. People actually can call out the songs they want to hear; we are pretty prepared. Every night is different. Some fans, they travel the whole tour with us so they can always expect a different show. They will never get bored with the same setlist, so it's always something different. But it feels great to play with Tommy and my guys."

On whether there will be a live release to celebrate the "Triumph And Agony" tour:

Doro: "Yes, we are planning a live record of 'Triumph And Agony', and I think, man, we already got some good stuff recorded. We are working on a new DORO record, so it's eighty percent done, the songwriting. Lots of anthems. I think we have some killer anthems in the making. I think they can be maybe as powerful as [WARLOCK's] 'All We Are', which is still one of my favorite anthems from our music. We are celebrating the thirty-fifth anniversary in Wacken, then hopefully in the States, too, another tour with many guests. But a new record is definitely on the way. I think it sounds powerful and great, lots of fast songs, definitely anthems and some dark, romantic ballads. I love the whole spectrum between super-hardcore, hard, heavy and super-sensitive [songs]."

On how she maintains her creative energy:

Doro: "It just comes out. [It's] organic. I don't sit down and try to write a song. It just comes out. Usually I get the best ideas at night before I fall asleep and you're in a state where you're totally open and suddenly you get a melody and the lyric idea at the same moment. Then I'm like, 'Oh God, I have to record it because it might get to a great song.' You can definitely feel it when it's a song with a lot of power. I always get a heartbeat that's unbelievable, I get excited. Then I know I got to take care of it. Sometimes you're just an instrument for doing a song; I don't know where it comes from. I guess it's there, somewhere, and you have to tap on it and do it and get it to the fans, then the fans feel 'Yeah, that's something great.'" 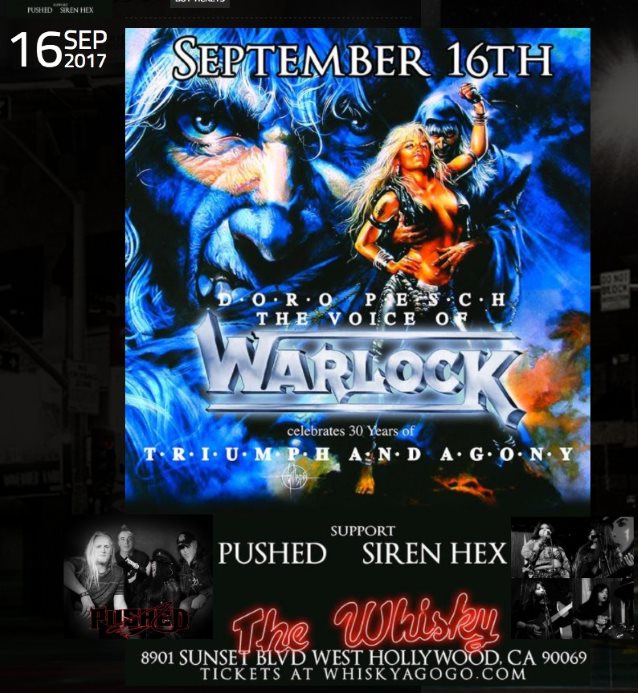