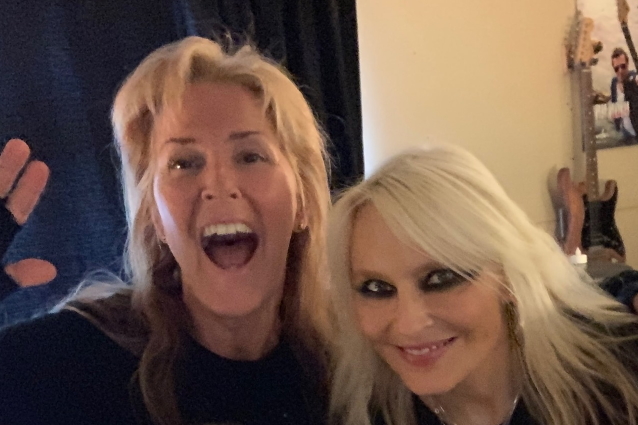 Doro Pesch has confirmed that she has collaborated with Lita Ford on a song for Lita's upcoming solo album.

Ford's long-awaited follow-up to 2012's "Living Like A Runaway" was once again helmed by guitarist/producer Gary Hoey, who contributes some guitar playing to the disc, alongside the rest of Ford's backing band, which continues to consist of guitarist Patrick Kennison, drummer Bobby Rock and bassist Marty O'Brien.

In a new interview with Canada's The Metal Voice, Doro stated about the pairing: "I just did something with Lita Ford, like, a year ago. I got this ['Metal Hall Of Fame'] award… I could give her this award. I got it one year before. Actually, in Wacken [Germany at the Wacken Open Air festival], the American guys came over. They flew to Wacken and I got this beautiful award. Oh, it was so awesome. And then I could give it to Lita Ford one year later. And we said, 'We've gotta do something [together].' Because we know each other from the early '80s. We did many photo sessions [together] and had many laughs. And we did actually something nice in the studio. And it will be on her record eventually. Yeah, we did something."

Five years ago, Lita released an autobiography, "Living Like A Runaway: A Memoir", via Dey Street Books (formerly It Books), an imprint of HarperCollins Publishers.

So excited to tell you guys I have an awesome collaboration in the making with my dear friend, Lita Ford. We were just...