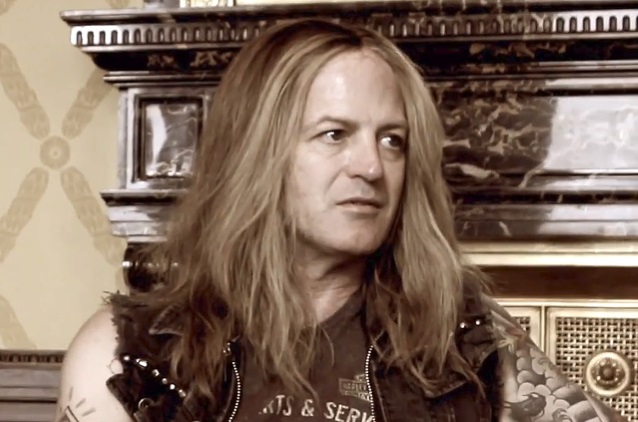 Doug Aldrich says that he worked his "ass off to keep WHITESNAKE alive" during his 12-year tenure with the band.

Aldrich was a member of David Coverdale's outfit from 2002 to 2014 before leaving to spend more time with his family. The guitarist played on two WHITESNAKE studio albums, 2008's "Good To Be Bad" and 2011's "Forevermore", and appeared on several live releases, including 2013's "Made In Japan" and "Made In Britain/The World Records".

Aldrich left WHITESNAKE four years ago, saying in a statement that he "had several recording and live commitments," so he "needed a more flexible schedule to conclude these before going full force as normal." He added: "Unfortunately, my schedule was not workable."

In a brand new interview with Mulatschag TV, Doug described his working relationship with Coverdale as "a chess match," explaining that David wanted me in [WHITESNAKE], but I told him that I didn't wanna just play his old songs — I wanted to create new music. And one time I filled in for Craig Goldy on a [DIO] tour with Ronnie [James Dio], and Ronnie said, 'Man, I want you back in the [DIO] band.' And somehow it got on Blabbermouth that I was coming back to DIO," he said. "And David [called me and said], 'Douglas, what's going on?' And I said, 'Look, D.C., he [Ronnie] wants me back. I'm with you, man — I'm with you — but we've gotta do some new music; we've gotta write together and see if we can move this thing forward.' So I worked really hard on bringing him a lot of music over the years to inspire him. And he'd give me some things, and I'd work equally hard on his ideas to make them sound like what I thought they should. I worked hard at it, so that's why I have to stand up for myself when somebody says, 'Oh, yeah, David Coverdale just told you what to play.' Not a fucking chance, dude. I worked my ass off to keep WHITESNAKE alive. That's how I see it."

Aldrich, who joined the rock supergroup THE DEAD DAISIES in early 2016, says that the creative process in WHITESNAKE was much different to that in his current outfit.

"The difference is that [in WHITESNAKE], only me and David did it together," he said. "With THE DAISIES, we do it all together as a band — the old-fashioned way; the way it should be. But you've gotta have everybody that wants to do that, not just collect a paycheck. So we work really hard together."

Aldrich was replaced in WHITESNAKE by Joel Hoekstra, who previously played with NIGHT RANGER.

THE DEAD DAISIES' latest album, "Burn It Down", was released on April 6 via Spitfire Music/SPV.