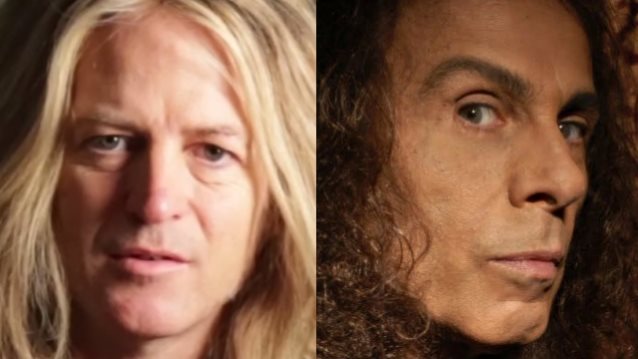 Guitarist Doug Aldrich, who was a member of DIO for a short period between 2002 and 2006, has revealed the existence of a previously unreleased Ronnie James Dio demo recording. The track in question was written during the sessions for DIO's "Magica II", a sequel to 2000's "Magica" that was left unfinished when Ronnie died in 2010. A "Magica II" track titled "Electra" made it on to 2012's "The Very Best of Dio Vol 2", but Aldrich says more material may surface from the sessions.

"I have a demo of Ronnie, an unreleased song nobody's ever heard," Aldrich tells Roppongi Rocks. "I offered it to Wendy [Dio, Ronnie's widow and manager who manages his estate] and, I don't know, maybe she forgot about it, but I said 'I have this song. It's really haunting.' It was during [the] time he wrote 'Electra'. I just played on it. We were kind of bouncing around some of his ideas and working on some of them. Before we did 'Electra', he had this other one that he said, 'Can you put a solo on this?' and he gave me the track. I had put a solo on it and then, when I brought it to his house, he goes, 'No, no, no. I've got this new idea called 'Electra'.' We didn't even listen to it. I don't even think he ever heard the solo because we were so focused on trying to get one song done to promote the tour that we were gonna do. I was still a member of WHITESNAKE [at the time], but I said to him, 'If you work it out with David [Coverdale, WHITESNAKE frontman], I would love to go out on the road with you.' Because he had asked me to go. He worked it out and then he got sick. But there is this one track that is haunting, because the lyrics are… And he doubled his voice, it's just really trippy. At some point, it will have to come out. I got it. I got the mix. I actually have the recording session, which has got Ronnie playing bass, Ronnie playing rhythm guitar and vocals. And then a drum machine. One day."

In a 2015 interview with CrypticRock.com, Aldrich said that he was "only really in [DIO] for about a year, but in that year, we did do the 'Killing The Dragon' [2002] record. I got to contribute to that record with a couple of songs also, which was nice," he said. "We did a lot in that first year. We did that record, a bunch of touring, and a live DVD called 'Evil Or Divine - Live In New York City' [2005]. Then I joined WHITESNAKE, but I kept coming back to DIO. There was a couple of tours in 2005. Ronnie said, 'Would you come on tour with me?' I said, 'Absolutely, I just have to speak to David about it.' David said, 'Cool, just make sure you come back,' because we had talked about some new music and he did not want me to split."

Having also played with LION, HOUSE OF LORDS, BAD MOON RISING, HURRICANE and Glenn Hughes, Aldrich joined THE DEAD DAISIES in 2016 and can be heard on that band's latest album, "Make Some Noise".