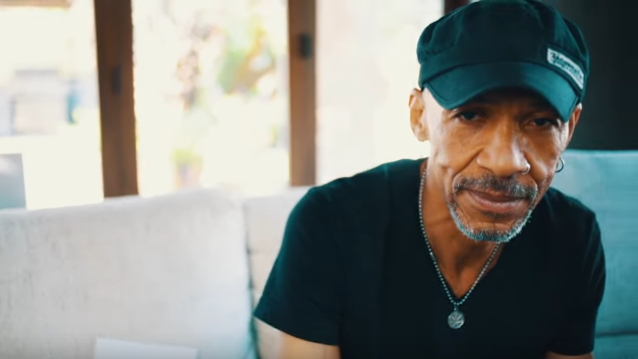 In a new interview with Meltdown of Detroit's WRIF radio station, KING'S X frontman Doug "Dug" Pinnick spoke about the influence his band had on the grunge scene in the early 1990s. He said (as transcribed by BLABBERMOUTH.NET): "There was thing called drop-D tuning we did in '88 when our first record came out. And almost the whole record was drop-D tuning.

"Someone told me one time, they said, 'The quickest way to get everybody to mimic you is to play something that any kid can play when they pick up a guitar immediately.' And drop-D tuning, when you pick up your guitar, you can play with one finger up and down the neck," he explained. "All of a sudden you've got HELMET and you've got — down the line, all these bands that were playing two-chord drop-D songs. And then ALICE IN CHAINS and PEARL JAM, they'll all tell you that we influenced them.

"I know Chris Cornell [late SOUNDGARDEN singer], and me and him were neck-and-neck sometimes writing songs. We'd talk about it. Somebody called me up one time and said, 'You heard the new SOUNDGARDEN tune?' And I go, 'Why?' And they said, 'It sounds like a KING'S X ripoff.' I go, 'What was it?' They said, ''Outshined'.' And I'm going, 'Yeah, it has that vibe.' Somebody said 'Spoonman' sounds like a song Ty [Tabor, KING'S X guitarist] wrote. And we were making those records at the same time.

"I remember talking to Chris when we were making the 'Dogman' record [and] they were making 'Superunknown', and we were laughing about how high we used to sing. And we made an agreement to sing lower on the record. And we got 'Black Hole Sun' and 'Flies And Blue Skies'. So I think that me and him, I'm sure, we influenced each other and pushed each other.

"I remember when [KING'S X's] 'Gretchen [Goes To Nebraska]' came out, we went on tour. And I remember coming home after seven months and turned on 'Headbangers Ball' and every band was drop-D-tuned and they were all new — except for BON JOVI. All the rest of them, because of this whole new thing that had happened. And I'm going, 'My goodness, they're doing kind of what we do.' And the screamers had disappeared, and those singers that sang real high to glam rock were gone. And people were grooving again and they were singing lower melodies. And that's kind of what we were doing when we first came out. So if that was an inspiration to people, yeah, I'll take that, 'cause we were just imitating people that we heard. [Laughs]"

Pinnick went on to say that he has known the ALICE IN CHAINS guys "since before they got signed." He recalled: "Layne [Staley, late ALICE IN CHAINS singer] did say to me, 'Keep putting out, writing songs so we can keep ripping you off.' He said that to Jerry [Gaskill, KING'S X drummer], actually. But he told me that on 'Rooster', he said, 'I was just doing Doug.' And I gave him a big hug. And I love those guys. They were just young kids. I remember PEARL JAM, they didn't have a record deal. And Jeff [Ament, PEARL JAM bassist] sent me a tape with TEMPLE OF THE DOG on the other side of it. And neither band was out. Back in the day, they looked up to us and they used to say, 'We can't wait till we can open for you guys and get record deals and stuff.' And we thought that was so cute. And then they all get record deals and just blow us out of the water. They all did — every one of them. And I smile and look at them and go, 'Man, I knew you guys when you were riding around in vans playing for nobody.'

"I remember KING'S X was on the road with AC/DC, opening, and some of the guys from PEARL JAM and ALICE IN CHAINS came to the show in Tacoma, Washington," Doug added. "And they were playing a little club. And they said, 'Would you guys come to the show?' And so after we got done playing, we went over to the bar, and ALICE IN CHAINS had MOOKIE BLAYLOCK, which was PEARL JAM, opening for them. There was probably, maybe 20 people in the place. And it was awesome. I remember watching Mike McCready and going, 'This kid plays like Jimi Hendrix.' He looked like he was 15. I loved them all.

"So, yeah, we all go way back. And yeah, we've all kind of inspired each other in some ways, I think."

KING'S X will release its 13th studio album, "Three Sides Of One", on September 2.