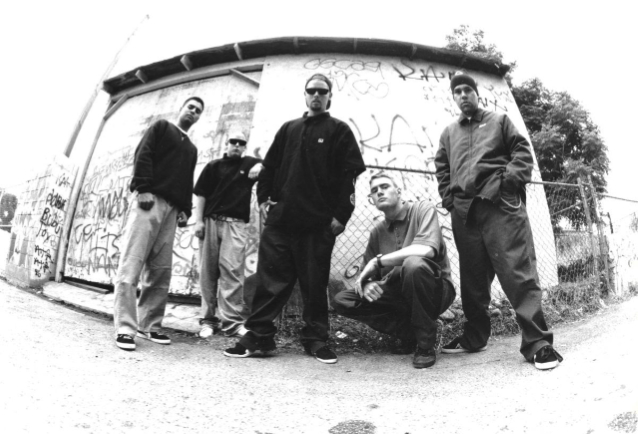 Los Angeles groundbreaking pioneers of the rap/hardcore hybrid and outspoken sociopolitical activists DOWNSET have officially joined forces with Nuclear Blast Records and are currently plotting one of the genre's greatest comebacks. To mark the occasion, the band has partnered with the label to reissue the controversial demos that helped ignite a street led movement around the world, "Anger/Ritual" seven-inch single and "About Ta Blast" seven-inch single, which were initially released 30 years ago.

Commenting on the signing to Nuclear Blast, founding guitarist Rogelio Lozano says: "Being signed to Nuclear Blast is a big honor for me. It's a great organization/record label and working with the people there has been nothing but pleasant, professional experience. Nuclear Blast is the #1 heavy metal label in the world with so many great bands and amazing album releases. It gives my band and me the feeling of being a part of something special. We feel right at home, excited and look forward into the re-release of the first two original 7" records as a reissued bundle, as well as our forthcoming sixth album!

"Look out for a mix of old-school sound and 12 songs featuring the new era of DOWNSET in 2022. With our new lineup, Bobby Blood Ponte on drums, Phillip Gonzales on bass, myself on guitar and OG Rey Oropeza on vocals, we plan on continuing the legacy with future albums to come. WE ARE BACK!!"

Additionally, DOWNSET has revealed a new music video today for the bonus demo track "Breed The Killer" which features vintage live footage of them performing the song. Watch the video below.

Monumental progress doesn't occur overnight. Some of man kind's most powerful words don't come from education or privilege, but erupt from the pain and roughness of the streets; they smolder through the cracks in the concrete until eventually grand truths are revealed, and the winds of change slowly emerge. It is with these notions in mind that old-school hardcore kings DOWNSET began to surface in Los Angeles, California in the early 1980s.

The genesis of DOWNSET itself was not one of entitlement or handouts, either. Originally formed with a straight edge mentality under the name of SOCIAL JUSTICE, the members of DOWNSET have been fighting against societal injustice for a long time. Oropeza began using graffiti as its own language for change in about 1982. "I would hit the streets… and when you hit the streets there's violence, there's racial injustice; it's not just violence in the sense of someone pulling out a gun on someone else, there's a violence that can happen to anybody, you can be rich, poor, male, female… and these things affect people for the rest of their lives," he explains. The group eventually released demos and shifted from SOCIAL JUSTICE to DOWNSET. "It has multiple meanings," explains Lozano (CYPRESS HILL, POWERFLO). "Some people are set up in life, some are down with a set, but it also means to start off underprivileged; to have a life full of disadvantages." All of these notions and inspirations eventually procured a self-titled studio album that was released in 1994 via Mercury Records.

A musical style that was distinctly hardcore combined with Oropeza's MC abilities allowed DOWNSET to stand out from other metal acts, while still being able to achieve a variety of tours with some of the most prominent bands of the time. After member rearrangements, and the 1996 release of "Do We Speak A Dead Language", the band went on to join the original "Tattoo The Earth" tour in 2000 with the likes of SLAYER, SEPULTURA, MUDVAYNE and more. This all coincided perfectly with the release of "Check Your People", and once again the band was on the hustle. With more member changes and the release of "Universal" a few years later in 2004, followed up by self-released "One Blood" in 2014, the band went on hiatus.